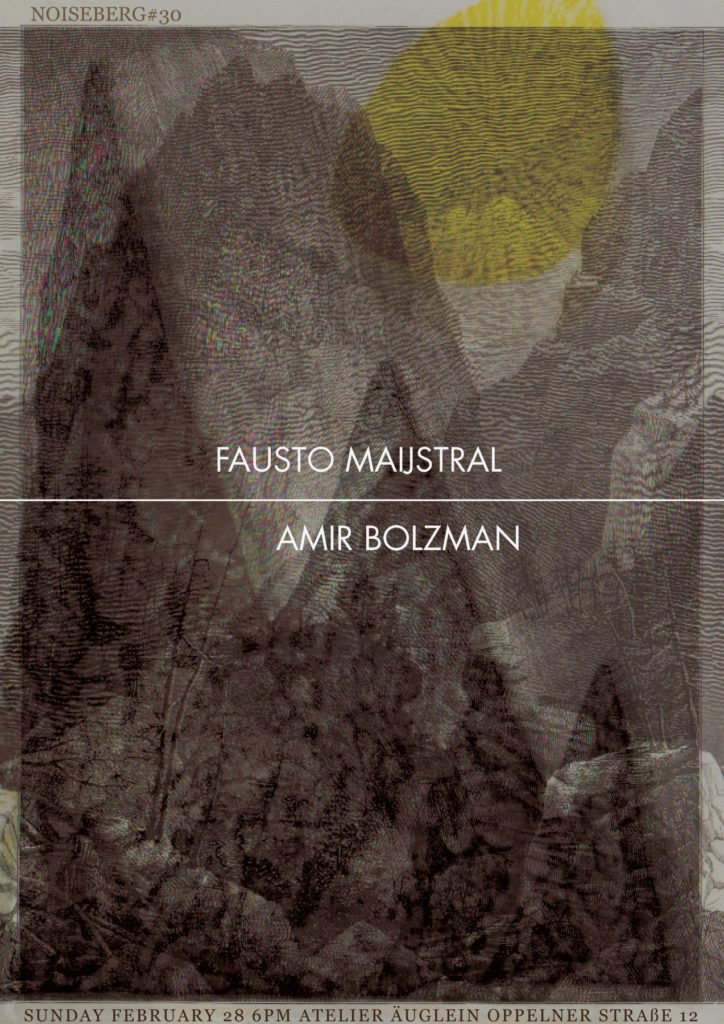 A night of experimentation with voices and (pre- or proto-)language featuring Alessandra Eramo – trained musician, visual artist, co-founder of Corvo Records and member of “Errant Bodies Sound Art Space” – and Michael Barthel – a Leipzig based, Ost-Berlin born experimental musicians that runs both the electroacoustic/spoken poetry label Recordings for the Summer and the art space focused on sound art and installation Kunstraum Barthel. These guys seem to bye quite busy. Ausland’s program is especially dense and good lately, have a look at the whole calender.
ausland-berlin.de/alessandra-eramo-michael-barthel

Too bad I missed a few Noiseberg sessions in a row for one reason or another, it’s always a pleasure to visit them and I won’t miss the chance they offer this week to see Fausto Majstral live. FM are a fantastic impro duo that is quite rare to see performing lately: one of them – our scientist/musician friend DuChamp – is based in Berlin and very active in town, while the other – Will Gresson – moved to the UK already a while ago. Expect dark drones, guitars, synths and unsettling, dreamy vocals. The other name on the bill is Amir Bolzman – his music made with self-made digital instruments oscillates between jazz and harsh noise. Live sets start at 6 sharp!
www.facebook.com/events/1176107035740804

An algorithm is a process that can be formalized in a step-by-step finite list and does not require any creativity or insight. Algorithms are way less boring than what this definition may first sound – they basically enabled all information technology and are involved in some of the most interesting and controversial intellectual achievements of modern times – see for example Gödel’s incompleteness theorem. Anyway, this is not a lecture about logic but an art exhibition, namely a large audiovisual installation by Irina Spicaka and Krisjanis Rijnieks that explores the use of generative (i.e. algorithmic) media production, its richness and limits.
spektrumberlin.de/events/detail/exhibition-4-process.html