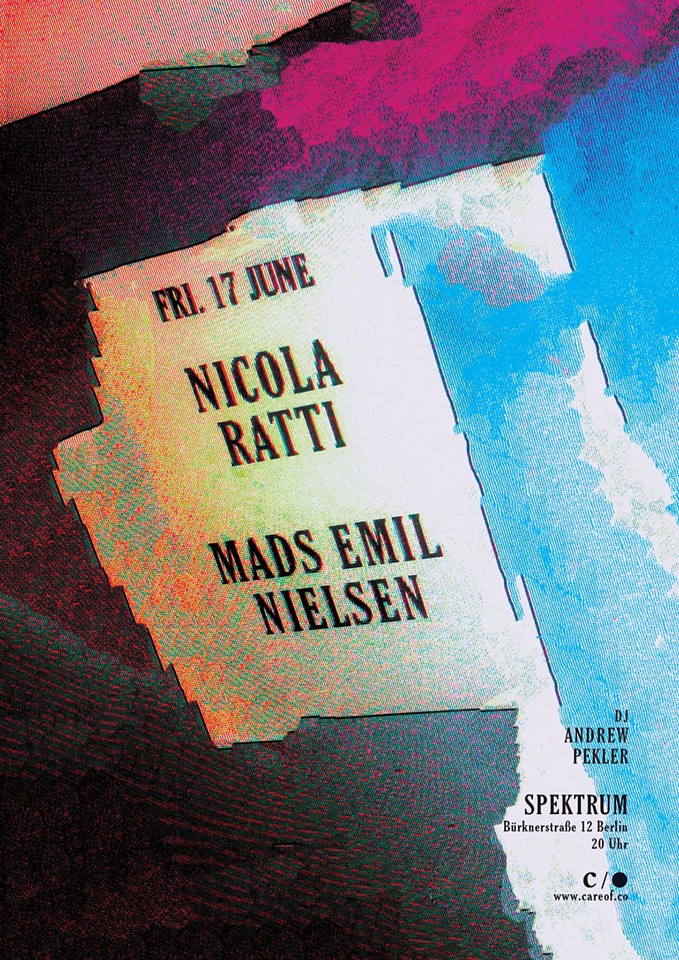 Here comes the new Grand Jeté season: Big and small names sharing the same desk in a not-too-big and friendly venue, many cool ladies in the lineup, a special curatorial attitude that provides quality techno and house while showing a sensibility for experimentation…such goodies are not easy to find in a club night, let’s face it and let’s go.
facebook.com/events/1011325708936586
www.ohmberlin.com

I have so many reasons to attend this evening I don’t know where to start from, I will list just a few of them: Nicola Ratti is a talented musician (and sound designer, and architect, and oh, btw he also runs one of the most interesting independent music space in Milano, namely Standards) who rarely performs in Berlin, Care Of Editions are an interesting label that regularly organises good events in town, my friends of Spektrum are celebrating the first anniversary of the venue this week (see below!) and I am looking forward to the dj set of Andrew Pekler – eclectic sound artist from Uzbekistan based in Berlin.
facebook.com/events/151454685257203

Voilà. One year of Spektrum. That is, one year of intensive, edgy program of concerts, audiovisual performances, exhibitions, talks, screenings, meetings…only twelve months and we’ve all seen and done so much good stuff in there. Lieke and Alfredo have worked hard and involved the best of the Berlin based scene as well as international guests with their open-minded, interdisciplinary yet focused and unique approach: D/B, Care Of Editions, JD Zadie, Marta Zapparoli, DuChamp, Alessandra Eramo, Jan Jelinek, Giuseppe Ielasi, Kasia Justka, Giovanni Lami, Wolfgang Spahn, AA.LL., Doron Sadja, Ennio Mazzon, Schneider TM…The list could go on for many kb. Join the celebrations!
facebook.com/events/137641766642677

Screening: The Discrete Charm of Geometry #167

Good films about mathematics – be it fiction or documentary ones – are, well, quite rare, to say the least. They tend to be superficial and biographical, maybe not to scare too much the laymen audience. I am a layman who longs for and sometimes tries and write popular science stories about maths that are different and more challenging than that. Always happy to find new ones.
facebook.com/events/1159788730709494