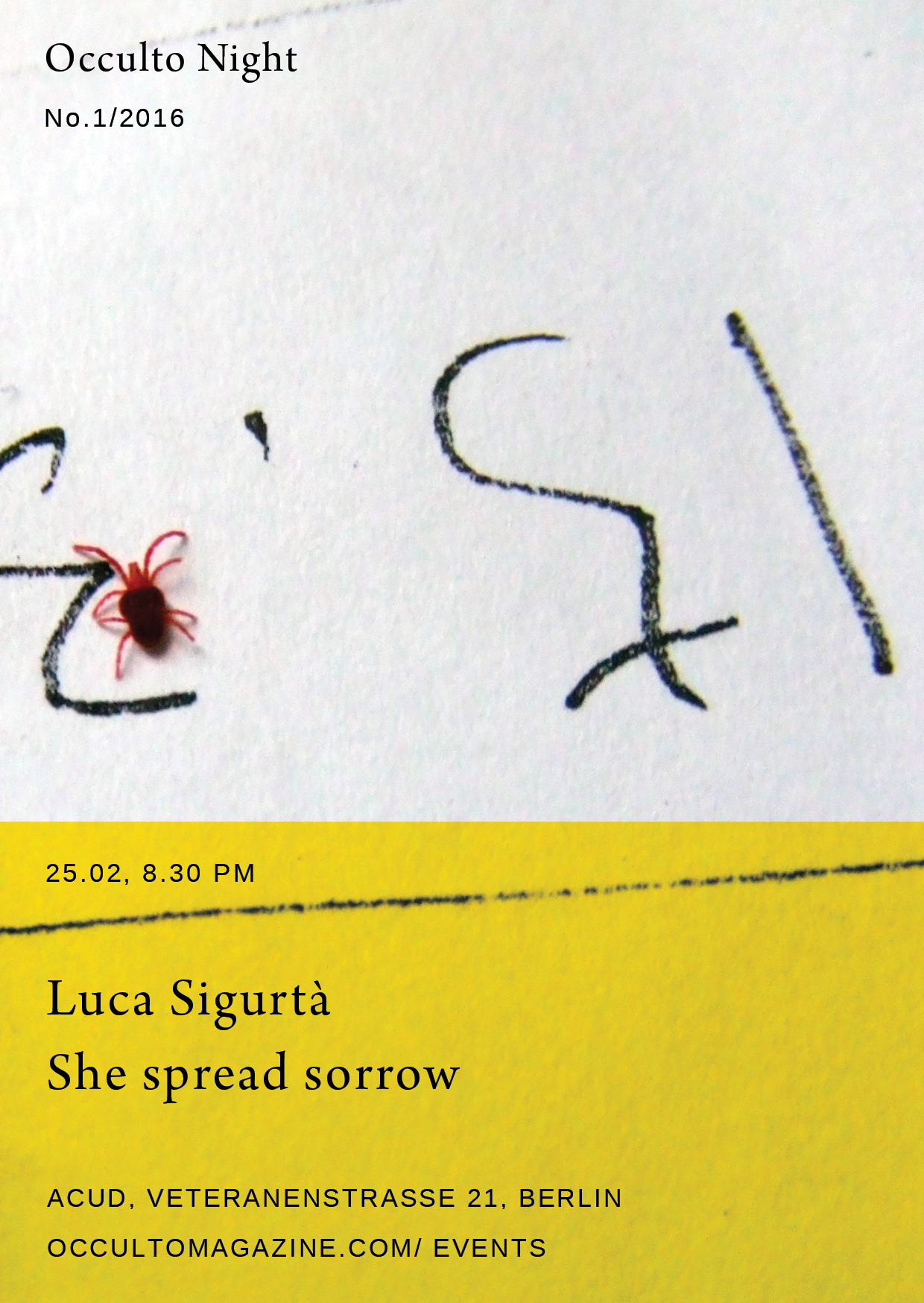 The first, very special O-Night of 2016 will host the performances of Italian electronic underground music hero Luca Sigurtà and his industrial/noise tour companion She spread sorrow. To all the Kreuzköllner: head North, we’ll be in ACUD – few mins on the U8 and there you are. To everybody: find us upstairs in the Studio room. It’s a beautiful space and you may hear about more Occulto stuff going on there soon :)

BEFORE, AFTER AND IN-BETWEEN
Occulto and Boring Machines distro
Moving and static images
Good music, drinks and conversation :)

ABOUT THE ARTISTS
Luca Sigurtà is an electronic composer active since the early 2000s. His new album “Warm Glow” has been released on the Polish label Monotype Records in September 2015 and represents a great stride in his compelling and very personal musical journey. Luca’s emotional electronic noise gets mixed with slow paced rhythms and analogue synth delicate flows in a sort of very original trip‐noise‐hop; melodies with a remarkable melancholic feel and beautiful digital/analog sounds show all the potential of his music.
soundcloud.com/sigurta
lucasigurta.com

She spread sorrow is the new death industrial / power electronics project of Italian artist Alice Kundalini, active since 2006 with the project Deviated Sister Tv. Her debut solo album has been released by Cold Spring Records in August 2015.
shespreadsorrow.wordpress.com
soundcloud.com/she-spread-sorrow

ABOUT OCCULTO NIGHTS
The Occulto Nights series bring experimental live music in Berlin, with an eye on touring artists and new projects that have never or rarely performed in town. Focus on independent, underground music research. No genre fetish: We love analogue synths and we love noise but we’re not afraid of laptops, guitars, songs and beats. After the acquatic explorations depicted on the flyers of the 2015 season (in the abyss) – that featured artists such as AUN, Stefan Juster (Cruise Family) and Mai Mai Mai –, 2016 visuals will be spent in a different element and dedicated to arthtropods, starting with a beautiful Red Velvet Mite that visited Occulto’s office a while ago.