The first time I met Onga we went to Leoncavallo together with a common friend, and we immediately agreed about something: Modeselektor’s liveset was bad. A bunch of minutes later he was talking about his label Boring Machines and trying to describe to me the music of a band he had released, Satan is my Brother. I mentioned Morphine: however right or wrong my guess was, it felt like there was some common grounds, and that we could talk to each other. In fact, we talked quite a lot ever since.

About eight years later and on less personal terms – although the boundaries between work and leisure or personal and professional are pretty blurry to me: Boring Machines is a fucking good label that releases and spreads out great music. That’s the main reason why we should celebrate his ten years of activity in 2016, why I am happy to host the Berlin edition of Ongapalooza and why you are all warmly invited to join us on June 3rd and 4th at WestGermany – you find details about the two evenings here.

Real and cool independent culture is there because somebody makes it happen, and sometimes is there even if there’s no big budget behind and even if no institution or sponsor supports it in advance. If you pay attention and possibly spend some Euros on it you can see it in action and be part of it – trust me, it is way better than just watch the documentary or read the book about it years later.

As for me, Onga and its one man label is a prime example and endless source of inspiration in terms of intellectual honesty, curiosity, creativity, engagement and generosity – he’s doing everything himself while having a full-time job, and still finds the time to supports offline and online the artists he releases as well as the scene at large (Italian Occult Psychedelia, anybody?) in oh so many ways.

Boring Machines has developed a vision and a style: try and listen to – and watch the cover artworks and packaging of – Father Murphy, Von Tesla, Fabio Orsi, BeMyDelay, Heroin in Tahiti, Maurizio Abate … or save my time and check yourself the almost 70 releases of the label at www.boringmachines.it and boringmachines.bandcamp.com. You get synth beats, you get noise, you get guitars, you get songs, you get improv … yet the whole thing makes sense and is fascinating, isn’t it? This is not just my opinion: plenty of publications, blogs, journalists, musicians, listeners et al. payed attention to Boring Machines during the years – you find a selection of relevant links at the bottom of this post.

On the occasion of the Berlin celebration, Onga prepared a special mix (see embedded player above) and answered a few questions of mine.

What’s special about Ongapalooza Berlin? Do you wish to say something about the line up, about what the audience can expect, about the city and its scene in general?

It is special to me for many different reasons. First of all, many of my recording artists moved to Berlin during the past years and still live there. It’s an occasion to have them aboard the Ongapalooza series of events without big traveling struggles. Then there’s the legacy with Occulto and WestGermany, where I attended some of the Occulto Fests you organized with DuChamp (who’s also in the line up).  Also, it’s too easy to make things where you live, you have to try and bring your music to other places, where you don’t have all the friends and audience that usually support you. Well maybe Berlin it’s not a proper example as we actually have many friends in there, but it’s a challenge anyway.  I’ve spent many weeks in Berlin in the latest years and still it’s surprising to me how many things happen there, so I’m glad we’re bringing our show to WestGermany, it makes us feel part of it.  I don’t know myself what to expect from the live acts. That’s why I work with these people: they can reinvent themselves anytime and be surprising. I can only say that I recently saw for the first time the live set of PASSED, at the first Ongapalooza in Rome, and he’s really amazing.

Could you mention some examples of music that influenced you as a kid and of music you like a lot nowadays? I confess I am especially interested in that part where it’s not so much about punk but rather about techno.

Oh well, to me techno is punk! I mean real techno, not that washed-out thing called minimal that raised ten years ago or so. That said, if you remember we both were djing at a party in Trento years ago and even if we were starting from different points our sets converged in techno and electro. I guess we share similar roots.  My musical influences are vast, they span from psychedelic rock in all forms to improvised and electronic music. Repetition is one of the things I’m most fond of, so speaking about rock music Spacemen3 has always been one of my greatest inspirations, together with all the kraut-something from the 70s.  Techno is the quintessence of repetition and it’s psychedelic itself. I’m not a dancer, I’m not into it for its bodily properties, I’ve always concentrated on the sound qualities and repetition. I was lucky enough to be there when the first wave of late 80s/early 90s hits, and I had real epiphanies attending some sets, especially when I wasn’t altered by something. Between 1989 and 1994 I guess I never listened to anything with guitars in it. 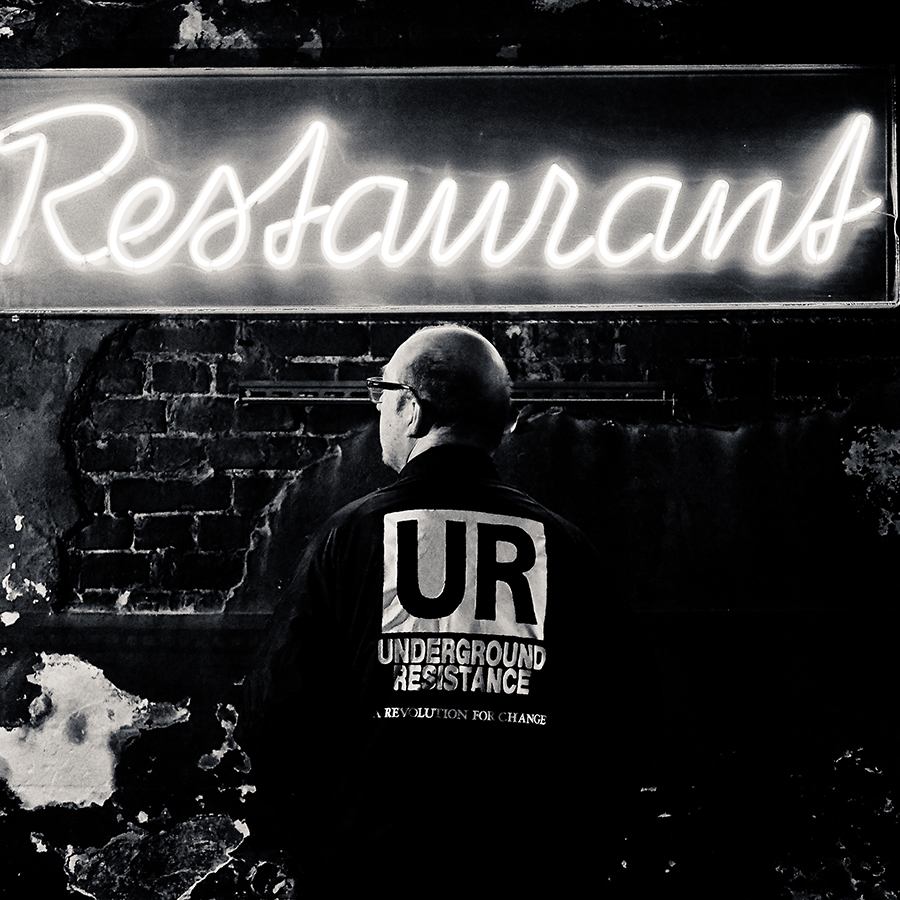 Years later, when I reconciled with rock music, or what can be assimilated to it, one of my favourite acts ever was Labradford, because even if hidden in the background, even if at slower bpm, they still had that kickdrum lying there.

How would you explain in a few words recurring themes on your social profiles such as “3 caffè” and “sbirri merde” to a non Italian audience?

HA! Sometimes during the day anger erupts. Most of the times I’m struggling against the bourgeoisie – it could sound pretty dated but that’s just how it is. Also, I’ve always felt uncomfortable with the notion of “police” and army in general. Sometimes these anger eruptions are translated in public posts on my social profiles, anytime something that bugs me happens I’m making a half-cryptic post about it, a sort of small thematic column. “Sbirri merde” (= Police is shit) is mostly made of pictures of various policemen in different situations with the hashtag #sbirrimerde and a caption of the picture.

“Tre Caffè” is harder to explain, even a 100% Italian who doesn’t know enough about our recent history may not get it. It has to do with some saints, with people who, over a certain period, thought that it was necessary to fight back (the bourgeoisie) using alternative methods to the standard ones. Maybe they lost, at least they tried. I summon them everytime I feel we need ‘em back.

A propos sbirri and social engagement: the first 2016 Ongapalooza took place in DalVerme, a well-know Roma based music venue that has been recently shut up by the local authorities. Let’s spend a few words on that and maybe you can take the chance to mention some more venues or events that have been important for Boring Machines during the years.
Dal Verme, which has been cowardly shut down based on a fascist law of 1931, is a small basement in Rome where the most adventurous concerts take place. It’s been running for seven years so far and hosted so many great shows. To put it straight, in the last five years I only traveled to Rome when I was going to see something organized by Dal Verme. We’re friends since before they opened the venue and they have a long history in the international underground scene both as musicians and as concerts/tours organizers.  To imagine Dal Verme you can think of your favourite Berlin venue for music, but add on top of it the best cocktail bar you can think of, for reasonable prices. It should be called HEAVEN. I’ll tell you a secret: Toni, one of the guys who runs Dal Verme, is the guy disguised as Mai Mai Mai, the mysterious musician from the Aegean Sea (also in the Ongapalooza Berlin line up). SHHH! Don’t tell anyone! 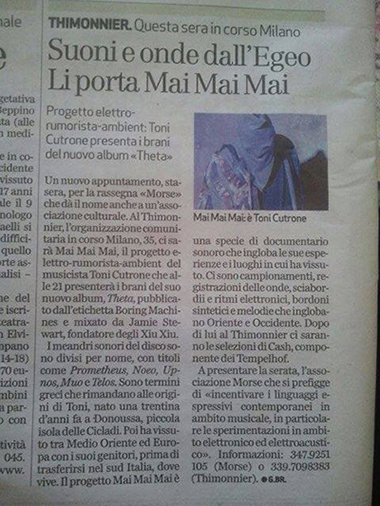 In ten years of activities with Boring Machines, but maybe more than twenty as a concert-goer, there have been a lot of venues/situations where I felt good and got to know special people. In Milan the former COX18/Conchetta or Cascina Torchiera, and now also O’ Artoteca and Standards (run by Alberto Boccardi and Nicola Ratti). Immersed in the open fields of the province of Modena, Barcsòn Vècc is the place where a lot of concerts and festivals happen, especially the festival Musica Nelle Valli, which sees one of the Ongapalooza appointments this year.