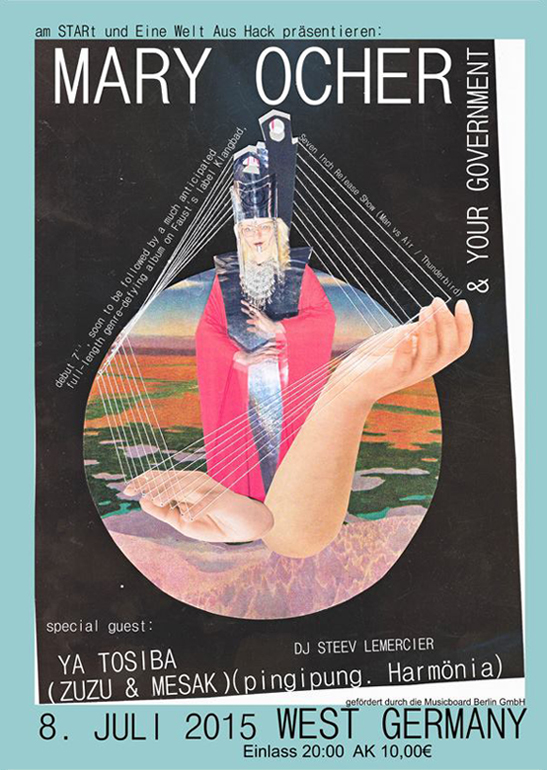 I am used to music projects that mix genres in a hard-to-define way, yet exactly because of that I can usually at least place them in a certain scene and build some expectations in regards of which venues they’ll fit into or which sort of audience they will gather. Every once in a while, though, there are characters who manage to be purely eccentric and render such categorisation harder, if not simply unnecessary: I think Klaus Nomi and the Austrian band Wipeout are two suitable examples, and that Mary Ocher’s solo project may be another one. The trio Mary Ocher & Your Government brings things even further in that direction by adding the beats of two talented drummers – Oliver Rivera-Drew and Stefan Widdess – as well as more synth sounds and space-age costumes to the game. The gig is part of a minitour organised on the occasion of a 7″ release.
facebook.com/events/103344370009218
yourgovernment.bandcamp.com/album/7-limited-edition
www.digitalinberlin.de/mary-ocher-ya-tosiba-west-germany-2015

According to my own personal approach to gender issues, there would be ideally no need to point out that something cool has been done by a woman, yet the world does not seem to be ready for such an attitude, so I warmly welcome this three-day program at Radialsystem. The list of directly or indirectly featured artists – be it through film-portraits, livesets, performances or other events and media – will include Electric Indigo, Gudrun Gut, Pauline Oliveros, Eliane Radigue and Les Femmes Savantes, among many others. Check the full schedule and take the chance.
www.heroines-of-sound.com
facebook.com/events/393899947483632
www.radialsystem.de/rebrush/rs-programme-monatsuebersicht.php

No big conflict with the previous recommendation as the latter will be going on during the day/evening and this one in the night. Early new wave/electronic experimentations from Tuscany (Alexander Robotnick), pioneers of Italo Disco (Fred Ventura), the best of the electro-techno scene that emerged in Rome in the late 90s and early 00s (Mat 101, Raiders of the Lost Arp), finest dj selection from Belgium (Rob’n’Zoopsie) and oh so much more: Griessmuehle’s Keller does get pretty hot in the summer, but the line-up is really worth it and you’ll find music & bar in the yard in the back as well; you can manage it fine by venturing downstairs for the sets you don’t want to miss and climbing upstairs for a fresh air break whenever needed.
facebook.com/events/370866166457780
www.slowmotionmusic.it/2015/05/5536
residentadvisor.net/event.aspx?717912