Finally back to our beloved WestGermany for a night of beautiful music, tape loops, field recordings, synths, drones, musical saws and more! 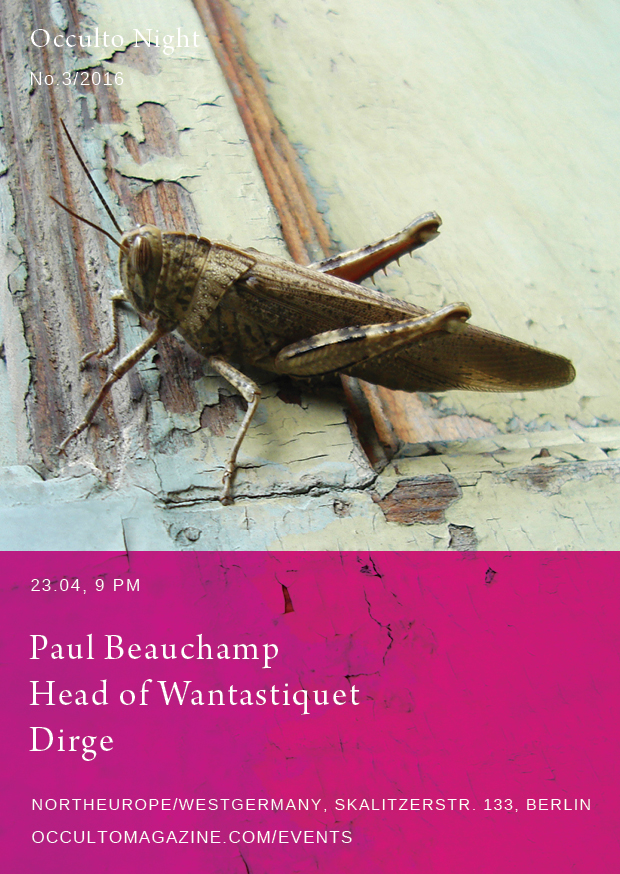 Paul Beauchamp began his musical career at the base of the Appalachian Mountains in the early 90s experimenting with tape loops, field recordings, found objects and improvised instruments performing in the art group Diviner. After several years of activity in the home taper scene he cofounded the international artist/musician collective Radon which went on to record and publish such diverse acts as Smegma and Steve Mackay as well as his own Radon resident tribal/industrial/noise group Sikhara with whom he traveled extensively touring America, Europe and Asia non-stop for several years. During the course of these events Paul has had to opportunity to collaborate with a myriad of influential musicians in the studio, live and improvised composition including Johann Johannsson, Colin Potter, Steve Stapleton, Jochen Arbiet, Fabrizio Modonese Palumbo and Julia Kent.

Dirge is the ambient/drone project by Digital in Berlin editor Dirk Markham. Dirk has been making experimental recordings and teaching himself every instrument he can get his hands on since his years studying mental philosophy at Edinburgh University in the late 90s. While an ongoing collaborative exchange with the Forest Records Collective still provides a strong bond to Edinburgh, Markham has been residing in Berlin for the last 10 years where he previously worked for Gudrun Gut’s indie label monika enterprise and is now part of the research and development team with Native Instruments

The Occulto Nights series brings experimental live music in Berlin, with an eye on touring artists and new projects that have never or rarely performed in town. Focus on independent, underground music research. No genre fetish: We love analogue synths and we love noise but we’re not afraid of laptops, guitars, songs and beats. After the acquatic explorations depicted on the flyers of the 2015 season (in the abyss) – that featured artists such as AUN, Stefan Juster and Mai Mai Mai –, 2016 visuals will be set in a different element and dedicated to arthtropods.