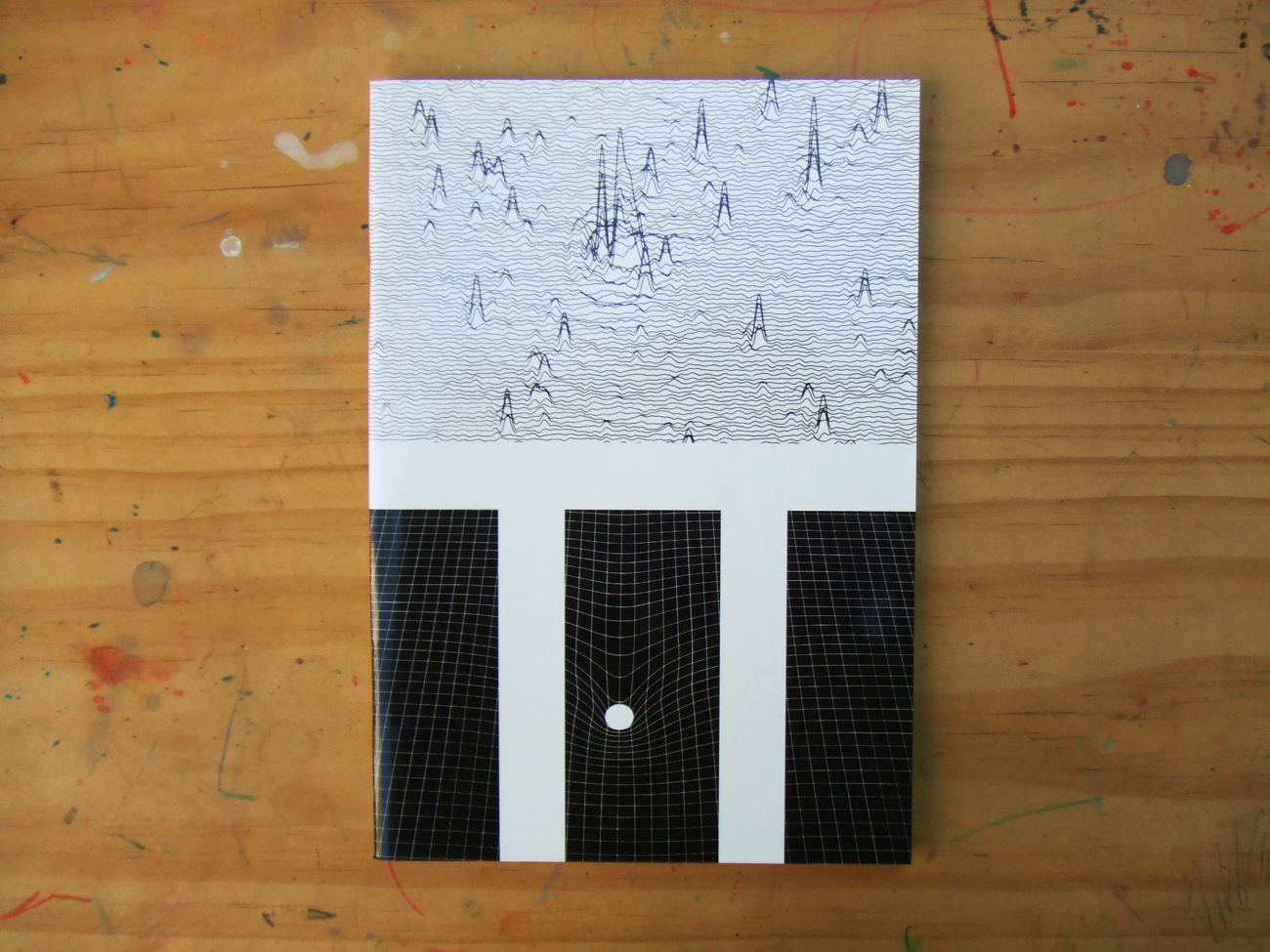 The time was not ripe to settle down and get a range life, so here’s the new Occulto issue. It’s dedicated to Constants & Variables, and to our friend 3.14. Proteins that pave the way to new forms of art; cutting-edge logicians that are not afraid of contradictions; gossips about the editorial history of the Bible; dowsers that hand down their special talent from father to son; tensions between scientific mainstream and outsiders no more able to understand nature in the light of the new theories; and more! As usual yummi supplement you get a compilation curated by Onga Boring Machines, featuring tracks by Maurizio Abate, MS Miroslaw, Von Tesla, Architeuthis Rex… 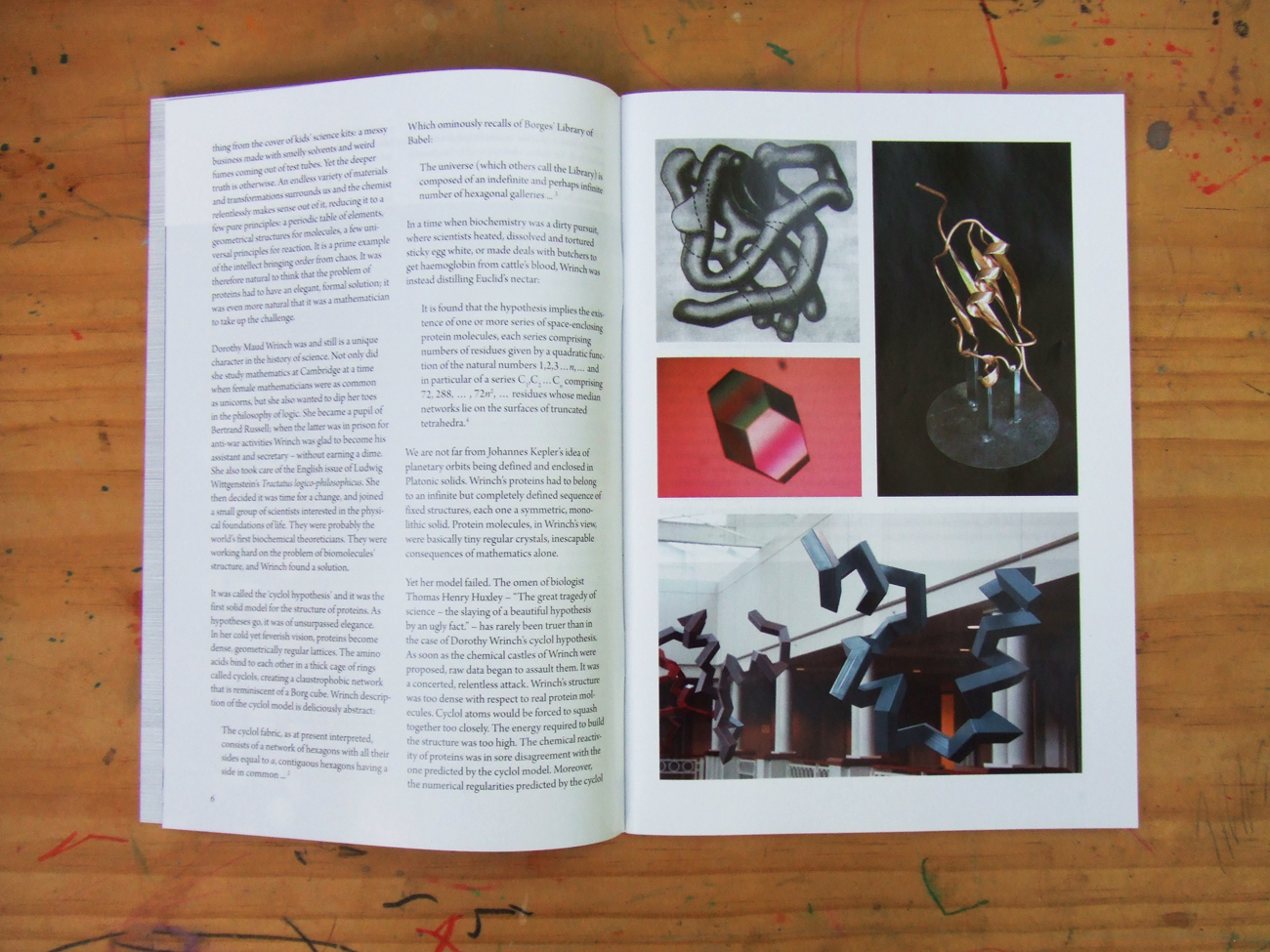 If I really must call something universal I’d rather go for an entity like the ratio of a circle’s circumference to its diameter, approximately equal to 3.14159 and also known as pi or π. This irrational and transcendental number whose value is impossible to know in its entirety – its decimal digits are infinite and don’t present any regularity – is the superstar among mathematical constants. It has made it into the laymen world in various forms, including a song by Kate Bush, a geeky practice called piphilogy – consisting in the memorization of as many digits of pi as possible – and a wonderful late 90s movie where a talented but troubled mathematician ends up using a drill to perform a DIY lobotomy on himself. Pi occurs in many different area of mathematics and appears routinely also in physics, notably in equations such as Heisenberg’s uncertainty principle or Einstein’s field equation, that describe fundamental principles of our universe. One is tempted to fantasize about its being a number ‘written’ in nature, maybe even a common ground to start communications with hypothetical intelligent aliens.
Alice Cannava, editorial text 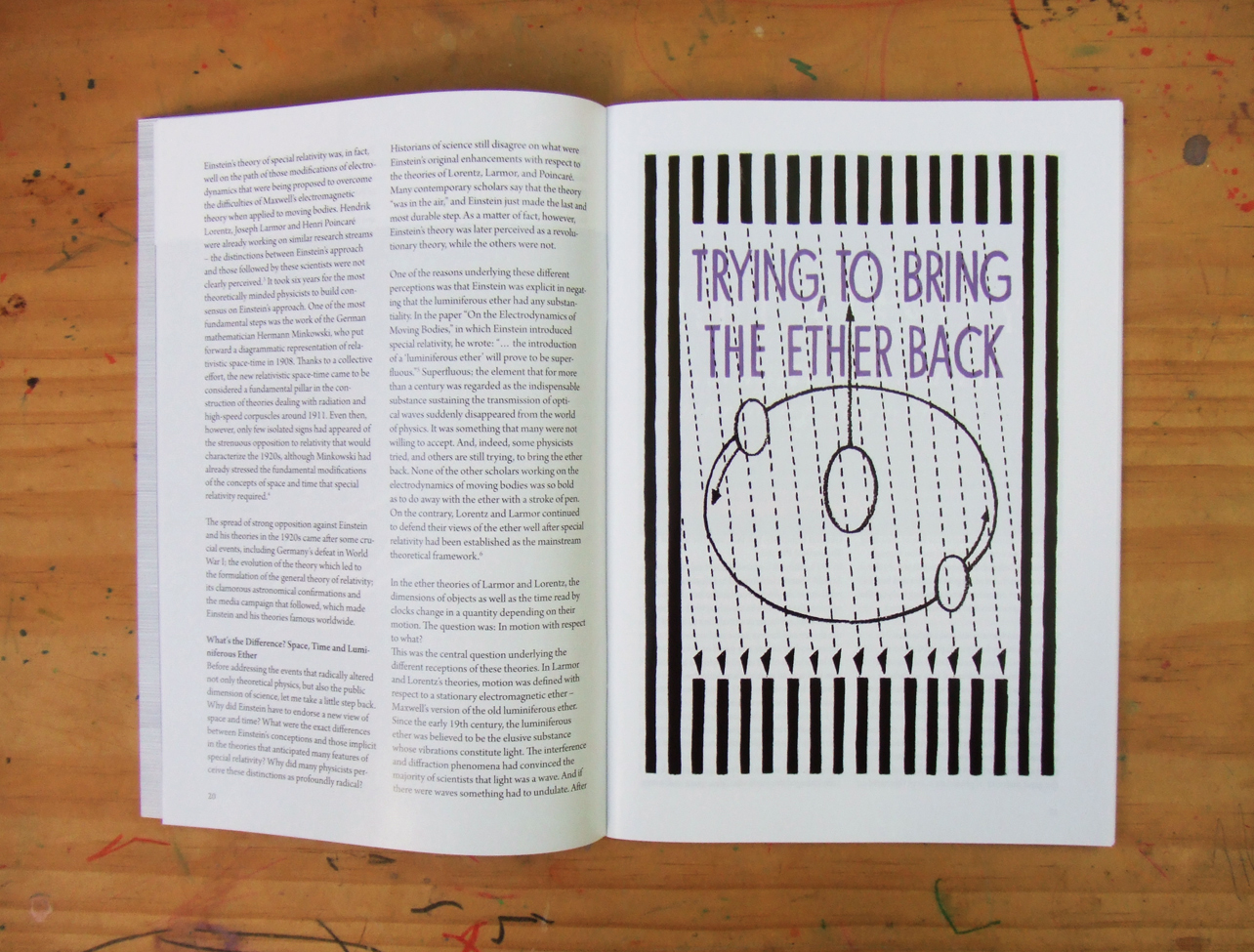 How to represent proteins? When Perutz and Kendrew obtained their first structures, the resolution was too low to identify the atoms one by one. Rather, what they saw were clouds of ‘electron density’ – that is, basically, a measure of how much stuff there is in a point in space. They also did not have computers with fancy video cards. They first had to slice the structure into bi-dimensional layers; then they had to print tons of numbers representing density, and then to draw painstakingly each layer by hand. Such layers were not however a three-dimensional structure; scientists had to figure out something that one could see, rotate and touch. Protein crystallography started an intense flurry of a unique form of art: building molecule models.
Massimo Sandal, “So Hideous and Visceral – Looking an Object The Endless Beautiful Forms of Proteins and the Mirrors We Use to See Them”

Without doubt, intellectual commitments and political sentiments were intermingled, but a closer look shows that the physicists opposing relativity had previously been alienated by the advancement of the new theories. Relativity and quantum mechanics had made the world incomprehensible to many experimental physicists, at the same time rendering their role in the national physics community marginal. As Wazeck shows, these physicists saw their research lose the interest of their fellow scientists. In addition, most financial support was directed toward research projects more closely related to novel theoretical advancements. This situation created a fierce reaction driven by the desire to defend their formerly authoritative positions.
Roberto Lalli, “The Dark Side of the Relativity Revolution – A Brief Trip through the History of the Anti-Relativity Movement” 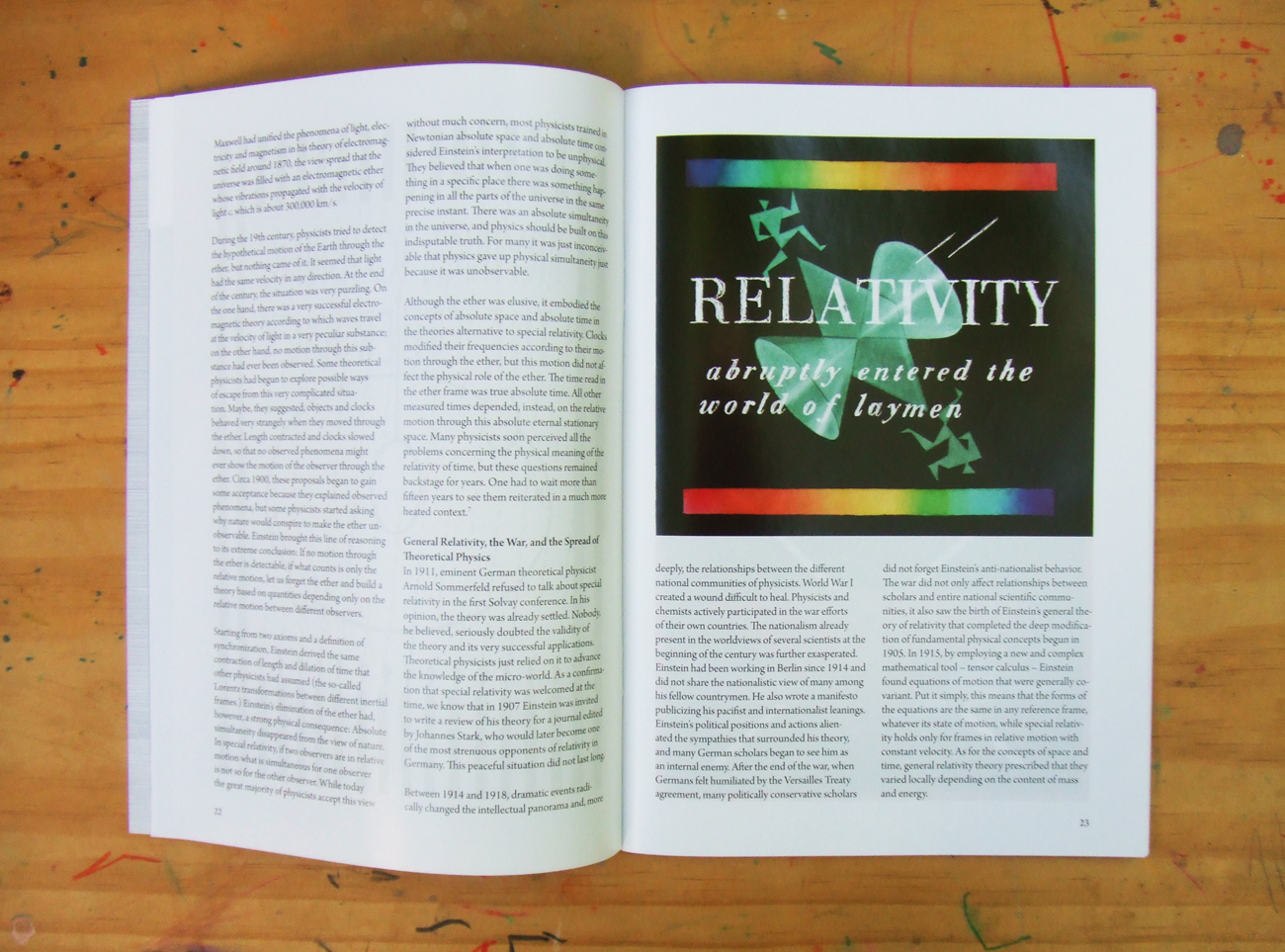 Boy George is basically telling us that if you can’t decide between two contradictory propositions – loves-me or loves-me-not in this case, but we can generalize the daisy game into A and non A (A ∧ ¬A) – then you’re left ignorant and confused, you won’t go anywhere from there. Nanni Moretti brings it even further: The baffling contradiction his character stumbled upon – highly charged with political and personal meanings, it’s about the crisis of the Italian Communist Party in the late 1980s – is tearing him apart, driving him to madness and desperation. Why, points out Nietzsche, let’s take up the challenge! Contradictions are nothing to be scared of, and we can’t avoid them – what we do need is a special language to handle them. Fair enough, answers Hassan-i Sabbah, but if A and its negation ¬A are both true then why not C, D and unicorns? If we accept one single contradiction then anything goes.
Alice Cannava, “R∈R ⇔ R∉R or: How I Learned to Stop Worrying and Love (Some) Contradictions”

My grandfather couldn’t see any sense to owning a dinosaur if it was stuck in a hill in central Kansas, so he agreed. The rancher’s sons carved out a big block of stone with the head and brought it down in a truck a couple of weeks later. My grandfather mounted it in his front yard and put up a sign that read, “Kansas Mososaur, ca. 100,000,000 years old,” and my grandmother planted tulips around it. Somebody wrote it up for the State Tourism Bureau, and between the tourists and people who got lost coming across Highway J from Amoret, there’d always be somebody coming around to take a picture of it. It was a fabulous place to have a lemonade stand when you were a kid.
Russ Hodge, “Remote Sensing”

We were working in a lab of ALBA – a synchrotron radiation facility near Barcelona – located 56 km away from the sea, yet we could ‘feel’ and measure the influence of the waves breaking down at the coast. Small and repetitive interferences in the measurements. We had to figure out some material that would absorb those tremors coming from the sea. It’s nice to think about it in a way, the tremor of the waves propagating at least 56 km away from the sea like a chain reaction, traveling through fields, roads, mountains, factories and passers by to finally arrive at our small and isolated capsule inside the synchrotron. It feels like nature is trying to say something to us, maybe something like “you can’t isolate yourselves completely from me because I’m so powerful and wild.”
Pep Vidal, “Constantly Variable” (artist’s project)

A better explanation, however, is that the interpreters of religious law knew that the season for herring fishing was short, and that fishermen would break the Sabbath no matter what scripture dictated. Faced with what they knew to be a fait accompli, they preferred adjusting the rules to man, since the opposite could not be done. That is, indeed, the meaning one can deduce from the biblical verse that immediately follows the passage of David and the showbread in Mark: “the Sabbath was made for man, and not man for the Sabbath.” Designers of rules, be they interpreters of scripture or modern treaty makers, know that rampant noncompliance weakens the law. If the Sabbath had to be broken, it was better that this happened under the approval of law than in violation of it. The law’s perceived legitimacy depended on it. The exception’s function is to save the law.
Krzysztof J. Pelc, “Necessity Versus God – How to Craft Exceptions to Law”

In spite of their claims of being steadfast defenders of tradition, contemporary fundamentalists’ approach to scripture is very much a product of modernity and a relative novelty in the almost 2,000 years of Christian biblical exegesis. This article intends to provide a peek at some historical ideas about the Bible and at their complex relation to the emergence of Western rationalism and modernity, while also tracing the editorial history of the “Good Book.”
Babsi Urbanic, “(Who Wrote) the Book of Law – Excerpts from the Bible Colophon”