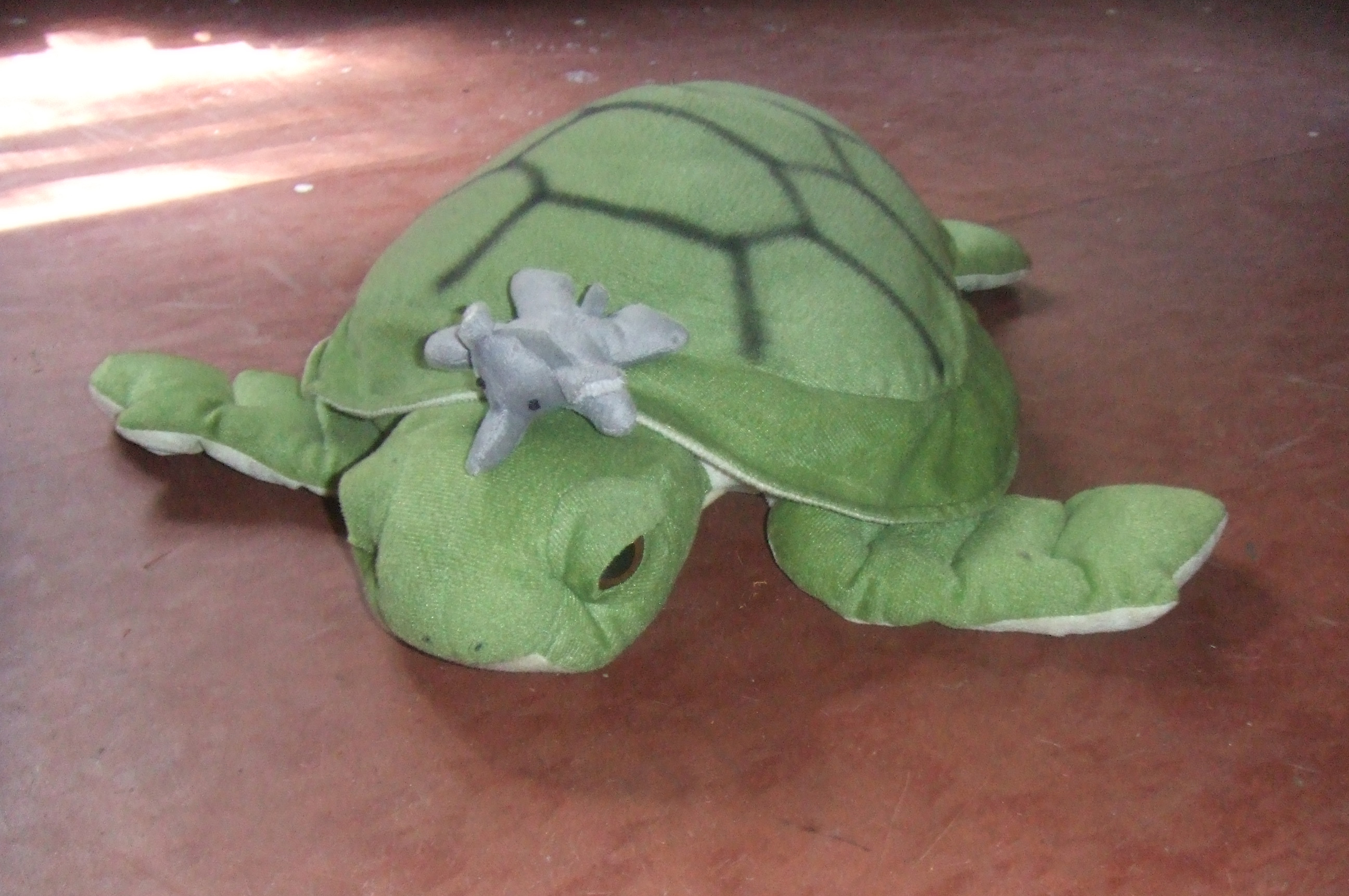 The photo of this week is nothing but a quickly and poorly done snapshot of stuffed animals lying on the floor of my living room. Wait: is it? Actually, the image above contains enough references and food for thought to fill several volumes. Let me give you some examples before you think I lost the plot.

First of all: happy World Turtle Day (May 23th)! The yearly recurrence is promoted and sponsored by American Tortoise Rescue and its goal is to increase knowledge and respect in regards of turtles – an extremely praiseworthy endeavour, if you ask me.

Why are turtles so cool? Well, because they are green, and pretty, of course. But that’s not all: they are also incredibly ancient and successful. The main feature of their body plan – the shell – was first evolved from backbones and ribs no less than 220 millions ago and never went out of fashion. When the blind and ever-changin power of evolution happens to stick to something this way it clearly means that that something is a very good idea. The big brain homo sapiens are so proud of is only about 200,000 years old, and even went a bit smaller in the latest 10,000. Were we talking about clothes, our intelligence would be a brown/neon green striped t-shirt with “Home is, where Berghain is” written on it, while turtles’ shell would be a Chanel petite robe noire.

You may have noticed that there’s an elephant lying on my stuffed turtle’s head. A Great Turtle – also known as World Turtle, Cosmic Turtle etc. – appears recurrently in Chinese and Native American mythology. It is usually depicted as a very big specimen that supports a flat or hemispherical Planet Earth. Take five minutes to find some example on Google Images, there are ancient as well as contemporary fascinating artworks inspired by this iconography. In some versions, the first Great Turtle that carries the Earth is actually standing on another, bigger turtle, and so on and so forth, creating a chain of turtles – the resulting paradox has been made famous by Stephen Hawking, thanks to a funny anedocte he quotes in one of his most notorious books, A Brief History of Time. In other versions of the myth, Planet Earth is actually carried by one or more elephants, that are in turn supported by the Giant Turtle. In fact, there’s not so much literature about such world-bearing elephants, and it’s been suggested that the whole story may have come out of a wrong translation of the Sanskrikt word ‘Nāga’, that means elephant as well as snake.

There’s at least another issue involving ancient books, controversial translations and turtles that may be worth mentioning here: “The flowers appear on the earth; the time of the singing of birds is come, and the voice of the turtle is heard in our land;” Song of Solomon 2:12 as translated in King James Version oddly put a turtle where one would expect – and in fact find, if one would pick up other versions of the bible where the animal has been identified as a turtledove – some kind of bird. Turtles do vocalize more than one may think according to recent studies, yet they are not well-known for spectacular singing activity. The image must be a powerful one, though, if an artist such as John Fahey – legendary American guitarist who spent his life on a unique verge between folk and cultivated music, spontaneity and intellectual experimentation – titled The Voice of the Turtle one of his edgiest releases.