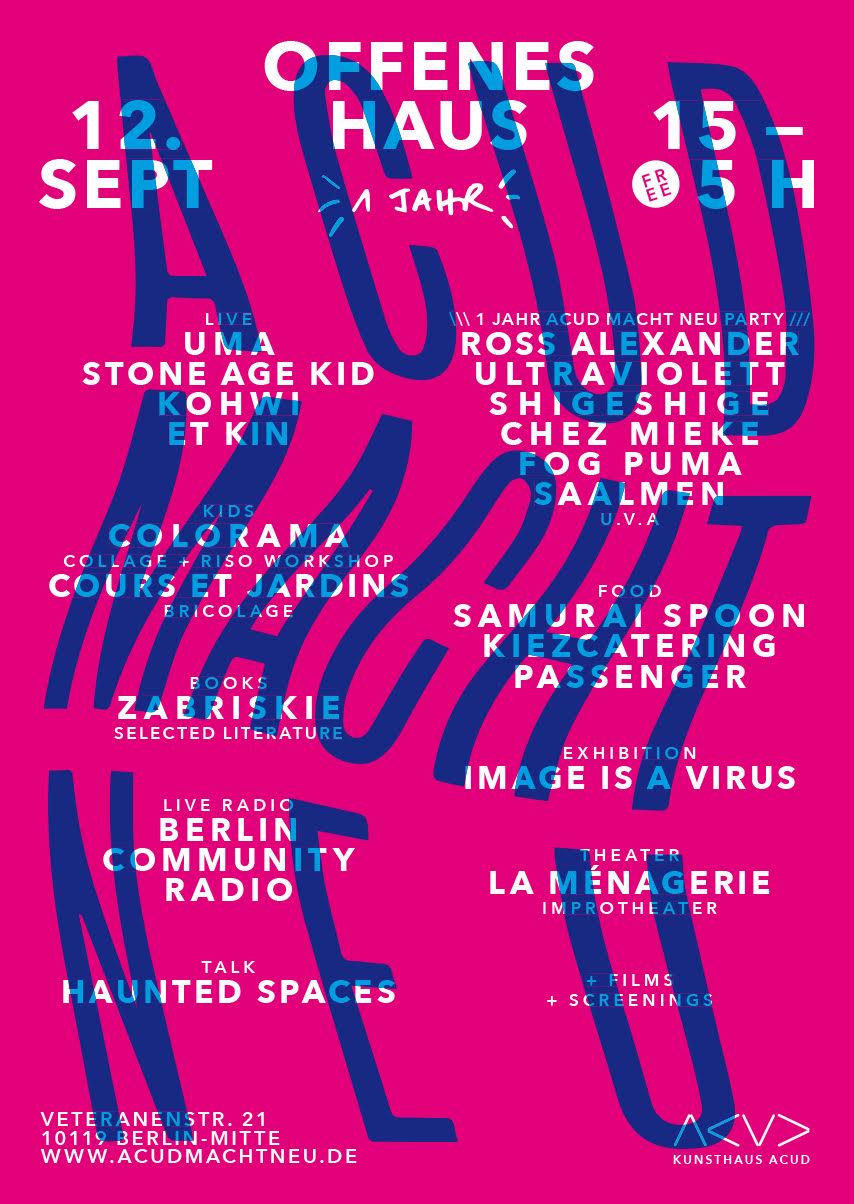 The slightly older than my mother Californian percussionist/musician/performer/poet Z’EV is considered a pioneer of industrial music. His self-made objects/instruments and the sounds he produced with metal, plastic and other materials could be compared to the early Einstürzende experimentations – only, Z’EV did them first. He’s still active and kicking, e.g. he recently released on Boring Machines the results of his collaboration with another industrial music legend – the Italian Simon Balestrazzi. The director of the documentary Ellen Zweig followed, filmed and collected material about Z’EV between 2007 and 2013. The screening is presented by NK.
facebook.com/events/424095371116282
spektrumberlin.de/events/detail/nk-presents-heart-beat-ear-drum.html

NOME is a new gallery that “operates between art, politics, and technology.” It involves a small team and a larger network of artists, activists, curators and researchers that have been working for quite a while with hacking practice, privacy/safety issues, cultural impact of new technologies and media and well, you got an idea already. The first show they presented in May – Paolo Cirio’s “Overexposed” – was really good and I am looking forward to this upcoming one, curated by Tatiana Bazzichelli in cooperation with Disruption Network Lab (infact, there’s a related DNL event going on the days after the opening, you find more info at disruptionlab.org/samizdata)
nomeproject.com/news/nome-presents-jacob-appelbaums-first-solo-show

This next episode is deeeeeep – check the soundcloud links of the participating artists and get ready for some dark quality beats at OHM – you may have visited it recently on the occasion of Atonal 2015. The curator/producer of the Grand Jeté series Hanno Leichtmann will be djing – as it often happen with people and projects I appreciate, he’s active in several fields and contexts – for example a sound installation of his has just been featured in the festival Lifelines #4: Roedelius at HKW.
facebook.com/events/773939776049672

Ach, these guys have already made so much that is hard to believe it’s been only a little bit more than one year. Live music – with a focus on psychedelia often crossing pop and electronica I dare to say – art exhibitions, club nights, screenings, lectures, workshops, open air street food parties, an online collective radio project, a cinema, a nice bar, co-working studios…The whole project showed to have its own style and personality and brought a lot of people to an area of Berlin that is indeed quite central yet not that hype anymore – and it’s also 15 walking minutes from my place, so thank you and gratuliere.
acudmachtneu.de/events/315/acud-offenes-haus-2015
facebook.com/events/545527755601651