I sing thee, Westlothiana, mother of us all. You cannot hear my song; being embedded in the rock for 338 million years made you hard of hearing. Yet you heard; you were alive.

It was a quiet time. Rain dropped and wind howled, yes, through forests of alien trees: lycopods, ferns and giant horsetails. A few millions of years later, insect wings would have buzzed around, but so far they only crawled between the mosses. Birdsongs would grace the mornings two hundred million years in the future. No, Westlothiana, you heard — felt? — softer, different sounds. Millipedes tickling the ground; spiders weaving their first orbs; the crawling of early amphibians between the mosses and ferns. Perhaps their mating calls, long forgotten squeaks and croaks. You heard them all, for they were danger or food. You would run quick, hush-hush, close to the ground. Catching a spider, away from a predator. And when you found the right spot, your tiny legs would burrow, fast, in the wet soil, digging your nest.

There, in the darkness underground, you shined. For the other four-legged creatures, the sluggish amphibians out there, had to come back to the water to lay their eggs. Not you. You gave your children a most precious gift: a shell. Your eggs would not need to bathe in the swamp. The shell protected them, keeping precious water inside, shielding them while they grew. Until, one day, the little ones crack open. A breath of air.

No more your sons and daughters, Westlothiana, will have to stay close to the water, stuck between pond and land. Your progeny will become the king of the land, unimpeded, free. A nest and your love is still needed for them, but the sun frighten you no more. Not only your eggs, but you yourself do not fear being dry. On the contrary, you bask in the sun whenever you can. Your skin becomes stronger and thicker, perhaps covered in scales. The rays of daylight warm you with little peril. And the warmer you are, the more active you can be. The more little bugs you eat, the more eggs you can lay. The more your offspring can conquer the world.

Indeed they call you amniote, the first amniote, or at least one of the first, one of the progenitors of them all. A ‘stem amniote’. The term is dry and technical. The meaning is not. Amniote basically is whatever has bones, four legs, and it is not an amphibian. If you, Westlothiana, were the first, it means you are the mother of all reptiles, all birds, all mammals that will fill up the world.

What a world your sons and daughters will sculpt. All the Tyrannosaurs thumping, all the whale songs, all the bat’s wings in the night and the pterodactyls diving in the sea; all the kangaroos jumping and all the jaws of the sabertooth tigers; all the elephants’ trunks and all the poisons of snakes, all the Roman emperors and all the mice in the barns, and uncountable creatures that will be and I will never know: you, Westlothiana, are mother of them all. 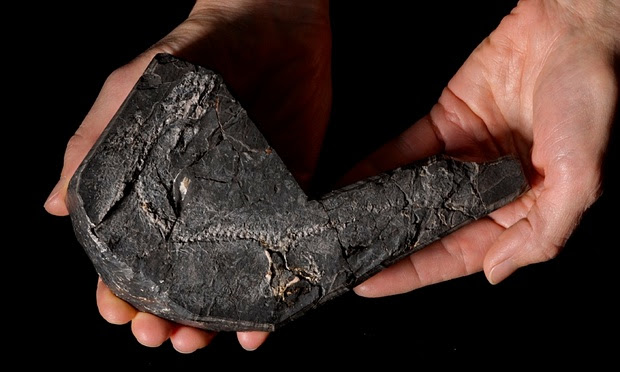 An example of the early fossil tetrapod Westlothiana. Photo: National Museum of Scotland. Source: The Guardian.

Maybe not exactly you — I see the evolutionary biologist frowning down there! But some creature close to you, so close a distracted eye would barely notice the difference. Perhaps it was the equally humble Casineria, perhaps it was something else lost that we will never know. Our minds need a symbol, a fixed point. I like to think it was you, that little skink-like thing, burrowing fast a hole between the roots of fern trees. In a ground that became rocks, the rocks becoming the West Lothian, the Scottish land that gave you a name.

I sing thee, Westlothiana. I am your son.