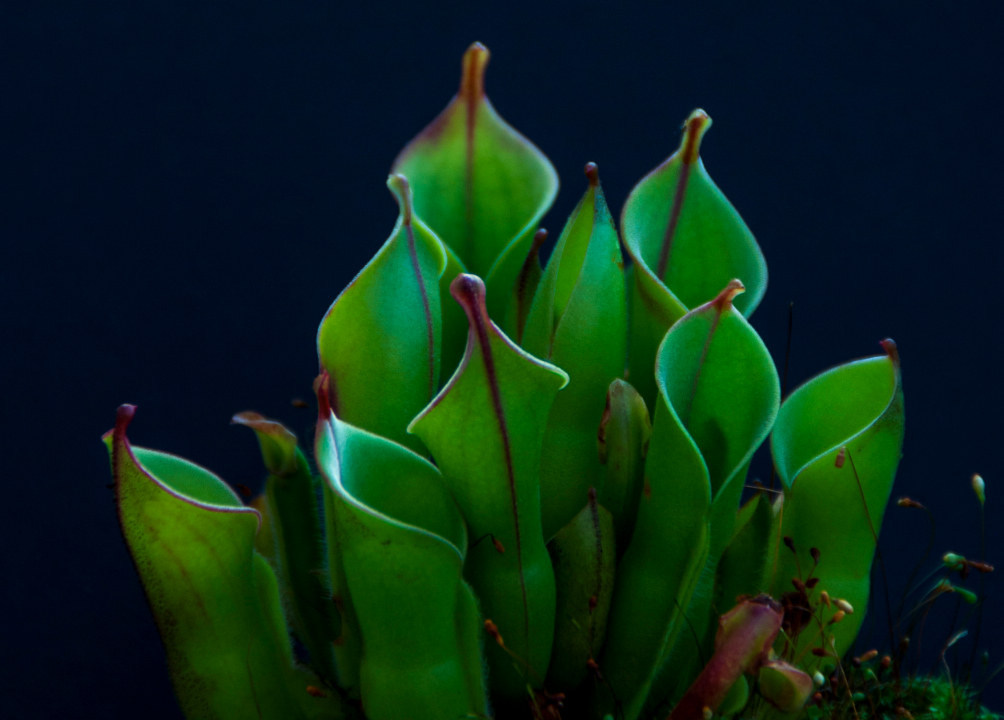 “Monsters from the dawn of man’s existence might still roam these heights unchallenged, imprisoned and protected by unscalable cliffs”(1) wrote British explorer Percy H. Fawcett about his expedition to Venezuela in 1911 and the effect his tales had on the imagination of his friend Sir Arthur Conan Doyle, who later used them as a basis for his novel The Lost World.

The unscalable cliffs are those of the tepuis — i.e. the table-top mountains — of south-eastern Venezuela, located near the border with Brazil and Guyana. Towering thousands of meters above the jungle, the tepuis are the remains of a large sandstone plateau that once covered the Amazon and Orinoco regions, and has been carved by erosion. Their sides are steep, almost vertical, and the altitude guarantees that the climate on the top has got nothing to do with that on the bottom. No living dinosaur has been found to date, but the idea of vicariant evolution was right, as the tepuis are ecological islands with their own endemic species; and their own carnivorous plant, Heliamphora.

As the name suggests, these plants look like little amphors — the amphors of the marsh: Helos ‘marsh’, not Helios ‘sun’. The misleading etymology has led some people to call them sunpitchers — now you know better. If you really have to use a common name, you might as well take after the Germans and call them ‘Sumpfkrüge’, but whatever you call them you should think of them as members of the family Sarraceniaceae, as they share with their North American relatives Sarracenia and Darlingtonia the killing mechanism of the pitfall trap. Their pitchers are modified leaves, rolled and fused into tubular shape, and in Heliamphora this is particularly evident in the seam at the front. The apparent simplicity of their morphology, summed to the persistence in popular culture of Conan Doyle’s pterodactyls, is behind their reputation as the most “primitive” pitcher plants. Genetic research has proven otherwise, though: we now know that Heliamphora and Sarracenia share a common ancestor, while Darlingtonia separated earlier. A fossil specimen from the Early Cretaceous discovered in China in 2005 (2) and described as Archaeamphora longicervia seemed for a while to be a candidate for the role of the common ancestor: an herbaceous plant, some 50 cm tall, whose leaves look like a mix between Heliamphora and Sarracenia purpurea. But it didn’t last long and further research has shown it was probably not a carnivorous plant at all – just another case of paleobotanic wishful thinking.

Heliamphora is the only pitcher plant that lacks the operculum or lid; it has instead a unique structure called nectar spoon that secretes, well, nectar, to attract the prey. Ants are their favorite victims: as they climb for the nectar, the slippery surface of the spoon makes them fall into the pool of liquid with which the bulbous bottom part of the pitchers is filled. And here’s where the frontal seam comes in: it is actually a slit that allows the plants, flooded everyday by the heavy rains of the tepuis, to control the water level. The viscosity of the pitcher fluid makes rainwater slide upon it and drain out. The slit is also covered in hair, to prevent the prey from being washed away — basically they are evolutionarily adapted not to throw away the baby with the bathwater. 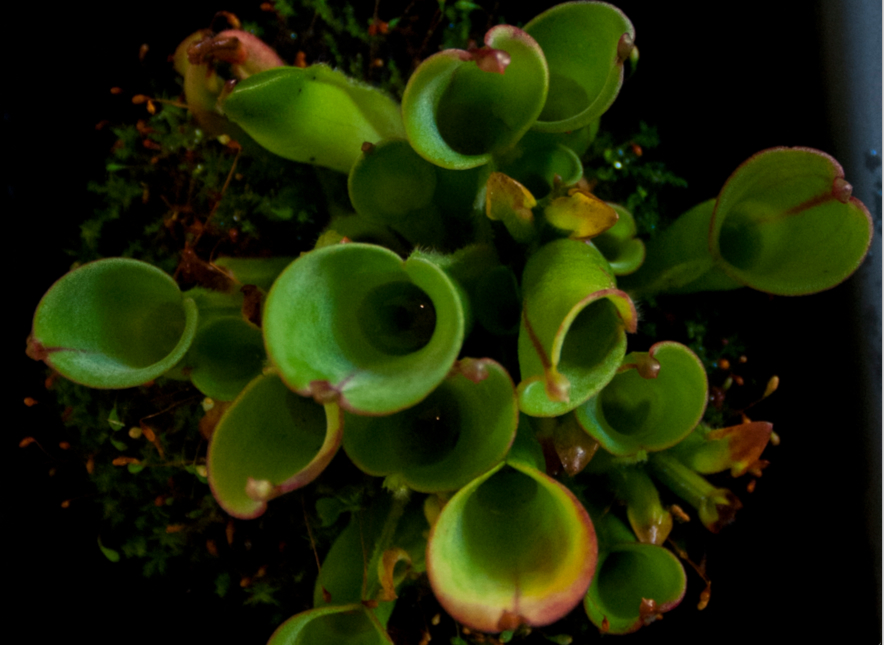 As in most pitcher plants, the upper part of the pitcher is covered in thin, down-pointing hair called trichomes, whose function has always been interpreted as that of preventing insects from climbing their way back up, much like the metal spikes on the walls of a medieval prison. A recent study (3) on Heliamphora nutans seems to suggest a different mechanism: at least in this species, the high wettability of the trichomes creates a water film on which the adhesive pads on the ant’s feet have no grip, while the low surface tension of the pitcher fluid keeps the trichomes wet by capillary activity. Wetting the plants increases the capture rate from 29 to 88 percent, so science says I must keep the spray bottle handy and mist them frequently if I want to get rid of those midges in the kitchen. They love the spray bottle by the way — most carnivorous plants do — just remember to fill it only with distilled water, of course.

The insect’s death by drowning is followed by digestion, which in Heliamphora occurs thanks to the presence in the water pool of symbiotic bacteria. These plants do not produce digestive enzymes on their own, so it could be argued that they don’t fully belong to the carnivorous club; the counter argument being that the symbiotic relationship with the bacteria is in itself an adaptation in the direction of carnivory. Anyway, this is nothing compared to the controversy surrounding the carnivory of Roridula: its victims are eaten by a symbiotic insect, whose feces are then absorbed by the plant. Outsourcing is definitely an option, but this example also shows how the relation between carnivorous plants and small arthropods is not exclusively to the latter’s detriment — it just depends which arthropod you are. A tiny spider made the tiniest net inside one of my Heliamphora’s pitchers, and got himself quite a few gnats with relatively little effort. 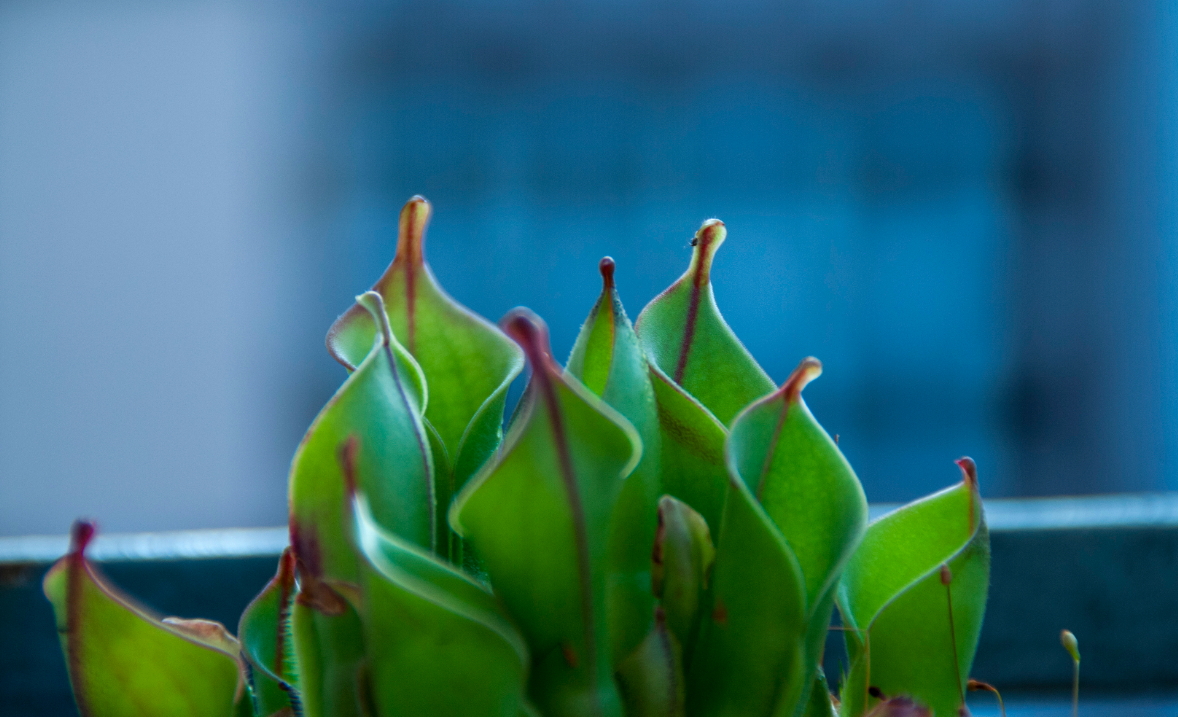 My first Heliamphora came by mail, and it was an H. nutans. Unfortunately there are no pictures of it since it died after about a month of suffering. Because its demise was the frailty of the roots — they can easily break while you put it in the pot — the solution is to buy a plant that’s already in a pot. When it gets too big and it’s time to replant it, just be careful to transfer the whole clump of soil in the new pot in order to reduce root damage. This advice is, of course, the opposite of what a serious grower would tell you, but on the plus side, it works.

Thanks to this method I now own two Heliamphoras, both from the subspecies H. minor. As the name suggests it’s one of the smallest varieties, so I can say mine are quite tall at about 10 cm and growing. Anyway, to identify Heliamphora subspecies botanists have to rely on flower anatomy: these plants’ leaf size can’t be used as a criteria because it can vary widely even within the same species. Between species the length reaches up to 50 cm long pitchers of H. ionasii and H. neblinae, and 4 meter tall shrub H. tatei — which is also the only one proven to produce its own digestive enzymes. (I wonder if my neighbors would complain if I planted a 4-meter-tall carnivorous plant in the courtyard, though I doubt it would eat their children.) 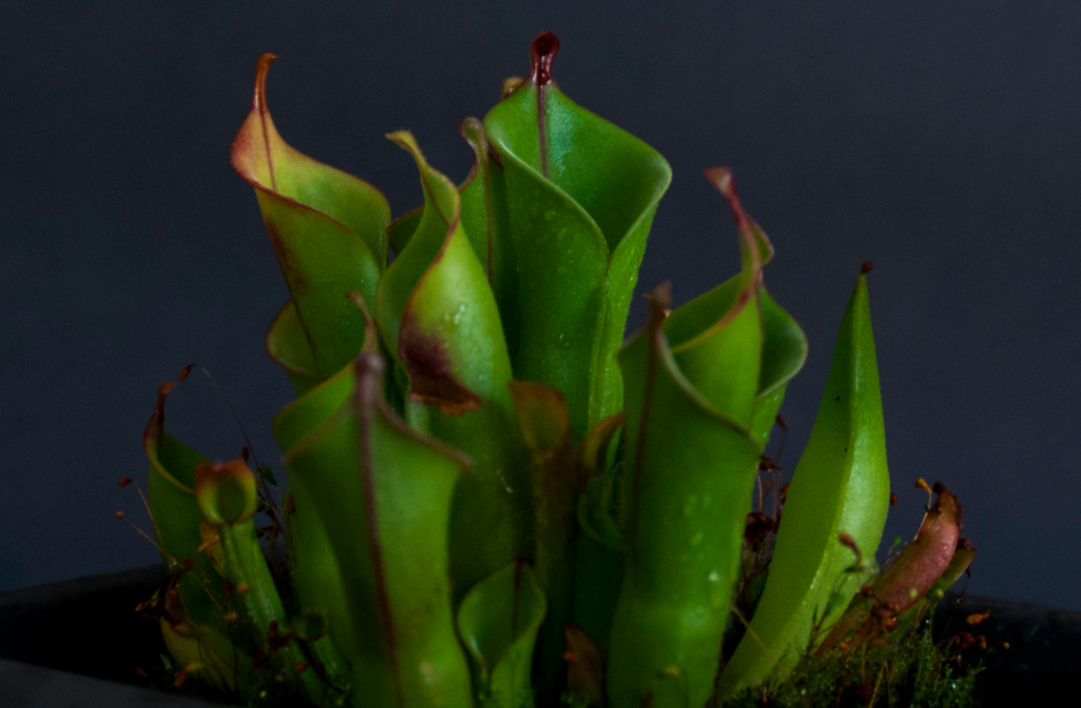 Since their first discovery in 1840, Heliamphoras have fascinated generations of carnivorous plant addicts, and thanks to the effort of botanists and horticulturists every known variety (23 species and 11 naturally occurring hybrids) is now available for cultivation — an impressive result of the last decades which is also helping conservation, as their native habitat is being threatened by tourism — not even the Lost World is inaccessible anymore.

The Heliamphora of my dreams is H. pulchella, a dark red-black variety that looks just incredible. In garden centers, you’re more likely to find H. nutans and H. minor, as they are among the easiest to grow. Recreating the humidity and temperature cycles of the exact tepui your exact hybrid comes from can be hard. The habitat of H. minor is restricted to the summit of the Auyán-tepui, at an altitude between 1650–2500 m above sea level. But what is it like up there?

The temperature range is between 8-20°C, with cold but mostly frostless nights. It rains on a daily basis, so much that it has been described (4) as a rain desert. The sky’s filled with clouds, cold wind blows mercilessly — it’s just like Berlin! My plants are super happy. The only difference is the frost, we have much more of that here than in South America, but as long as you keep them indoors, and keep paying the gas bill, your Heliamphoras will feel perfectly at home.