One more before the summer break! N.B.: this time we’ll be swimming down to Neukölln, the event will be hosted by Loophole in Boddinstrasse. We’ll have Mace. with his electronica/synth wave sonorizations – see Occulto Compilation #2 – Babau’s Berlin debut with their exotica/ambient/post-rock – see the upcoming Occulto Compilation #4 – and the master of pedals and drone Tatsumi Ryusui. 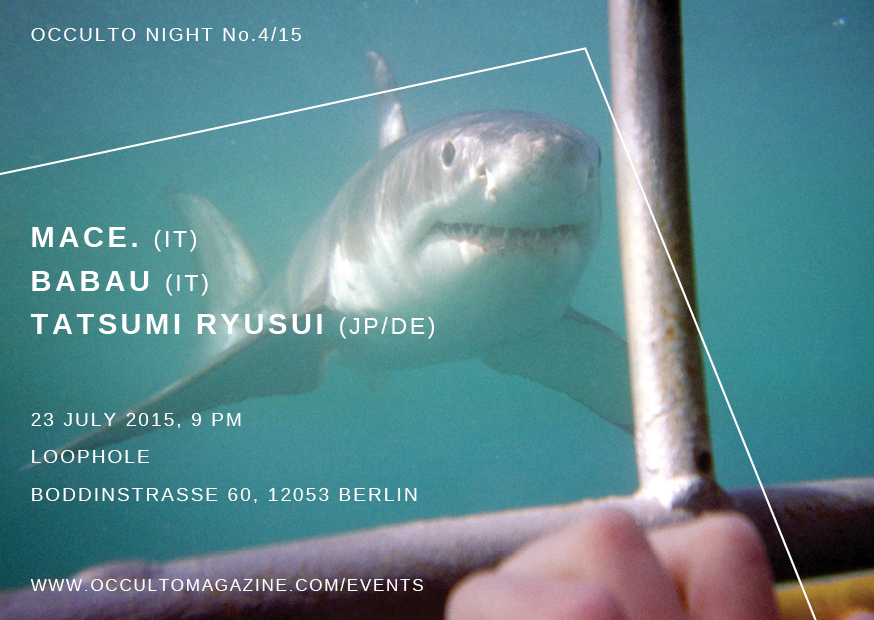 MACE.
Mace. is the irrational identity of the Italian sound artist Enrico Cesaro. His music comes from the urge to sonorize and narrate historic and financial events and appears now as a deranged entanglement of vintage electronica, synth wave with shots of industrial and power electronics.
So far, it has released his music on the Seattle based Further Records, the italian Eclipse Music (that recently released his new Ep “Non Succede Niente”) and he just announced his forthcoming 12” for new Violet Poison’s label Veleno Viola, that will be released under the alias “1944 To Eternity”.
soundcloud.com/macekolldept
eclipsemusic.bandcamp.com/album/mace-non-succede-niente

BABAU
Babau – boogeyman or “black man” in Italian folklore – is the duo project of Luigi Monteanni and Matteo Pennesi, both born in 1992. It started as an ambient/post-rock bedroom project. Following the release of the self produced ep “Tapes from the bedroom”, the duo, captivated by the post-War American exotica among many other sounds, decided to focus more on world music, psychedelia and the new texan-californian dub vibes. Their current setup includes instruments such as ethnic percussions, a bass clarinet and an electric thai phin; their recent recordings at Plaster Studio became an ep, “Papalagi”, published on cassette tape by Artetetra (Home-run indie label, founded by Luigi and Matteo) and Narvalo Suoni (italian DIY label).
soundcloud.com/bab-u
babau.bandcamp.com/

TATSUMI RYUSUI
Tatsumi Ryusui is a Berlin based experimental/noise/ambient guitar player. processes several proper, accidental or self-build instruments to generate delicate, yet powerful and astonishing ambient textures that connect drone with the cathartic side of noise.
soundcloud.com/tatsumi-ryusui
vimeo.com/tatsumiryusui