Some more swimming in the ocean depths: the third electronic episode of our 2015 season proudly presents the very first liveset of Mai Mai Mai in Berlin – Rome based project known as part of the Italian Occult Psychedelia scene (www.taz.de/!5013772) – and two Berlin based musicians that will be performing again in town after a loong time: the polymath traveller Fabio Orsi and the synth guru René Margraff.

Take the chance and join us for another night of good music at our beloved second home by choice aka NOrthEurope/WestGermany. Occulto and Boring Machines distro to be found, as usual, on the long table at the entrance. Live music must be finished by midnight and we have three livesets, do come early if you don’t wanna miss them – please do :) 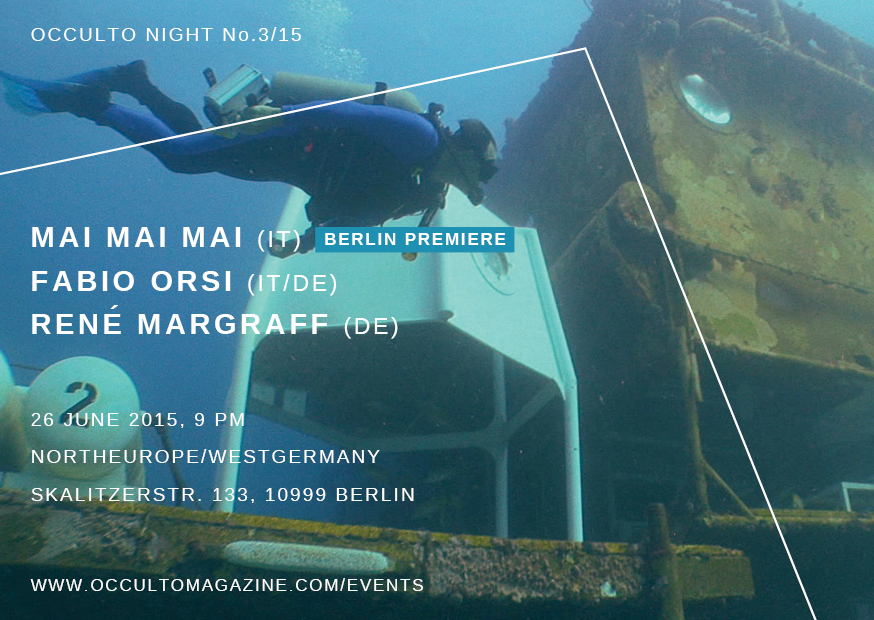 MAI MAI MAI
Born on a little island of the Aegean Sea around 30 years ago. Since childhood, he followed his parents around Europe and the Near East, assimilating the different cultures, atmospheres and sonorities of the places he was involuntarily taken to. Short periods of time which were intense enough to leave indelible traces. This project is the transposition of those experiences into music and sounds: a mix of drone and ambient, steamy technoid rhythmics, percussions, field recordings and sound-scapes which lead us to ancient and arcane ages, on the border between east and west.
After the debut Theta LP, out on Boring Machines (2013) and mixed by Jamie Stewart (Xiu Xiu), Delta (Yerevan Tapes, 2014) is his second release and second part of his journey across the Mediterranean Sea, through hidden memories, old unconscious and sounds of past experiences, put together and mixed today using tapes, synths and sequencers. In the meantime, a collaboration with the producer LUNAR LODGE (LL/MMM – 12″ out on Love Blast / Instruments Of Disciplime) makes him exploring more and proper industrial and dark techno sounds: all done with genuine analogue equipement (909, 707, MS20, Opera 6, Pro-One…)
May 2015: PETRA (One Sided LP out on CORPOC) comes out as an appendix to his Trilogy about the
Mediterranean.
maimaimaikr.blogspot.com
facebook.com/maimaimaikr
maimaimai.bandcamp.com
www.ursss.com/2014/10/mai-mai-mai-4 (Live Video)

FABIO ORSI
Fabio Orsi is an electronic musician from Taranto specialising in atmospheric drone. In his compositions the languages of popular tradition meet the avantgarde approach, creating an original and charming mix. Orsi’s music originates with field recordings through which he seeks to capture images in sound inspired by the historic pre-war folk recordings made by Alan Lomax.
Since his 2005 debut, Fabio Orsi has consolidated his reputation as a key figure of the international nu-folk electronica underground with a bewildering yet fascinating series of solo works and collaborations dominated by psychedelically flavoured soundscapes. Orsi creates atmospheric audio postcards with a tangible sense of time and place, utilizing layers of guitars, old keyboards and found sounds, having a keen attention to details, loops develop so naturally that it’s almost impossible to notice when certain sounds are brought in and out. His works are out for many different labels around in the world, A silent Place (Ita), Last Visible Dog (Usa), Digitalis Industries (Usa), Preservation (Australia), Porter Records(Usa) and many others.
Fabio Orsi’s music speaks like a deep hole into the ground of loved/hated traditional music, it’s a snatch with the past, watching it from unusual perspective, with deforming lens under coloured lights, music never meets Art, it is something like a hack. Where the streets are swelling as the veins and the buildings are collapsing, he plants a microphone cold as a needle, he plays naked and old melodies just for lovers.
fabioorsi.bandcamp.com
soundcloud.com/fabio-orsi

RENÉ MARGRAFF
René Margraff is a German, Berlin based artist who released albums at such labels as 12k, Analogpath, Under The Spire, Twisted Tree Line, Nomadic Kids Republic. His Experimental/Drone/Ambient/Noise/Folk liveset will open the evening.
pillowdiver.tumblr.com/music
pillowdiver.bandcamp.com