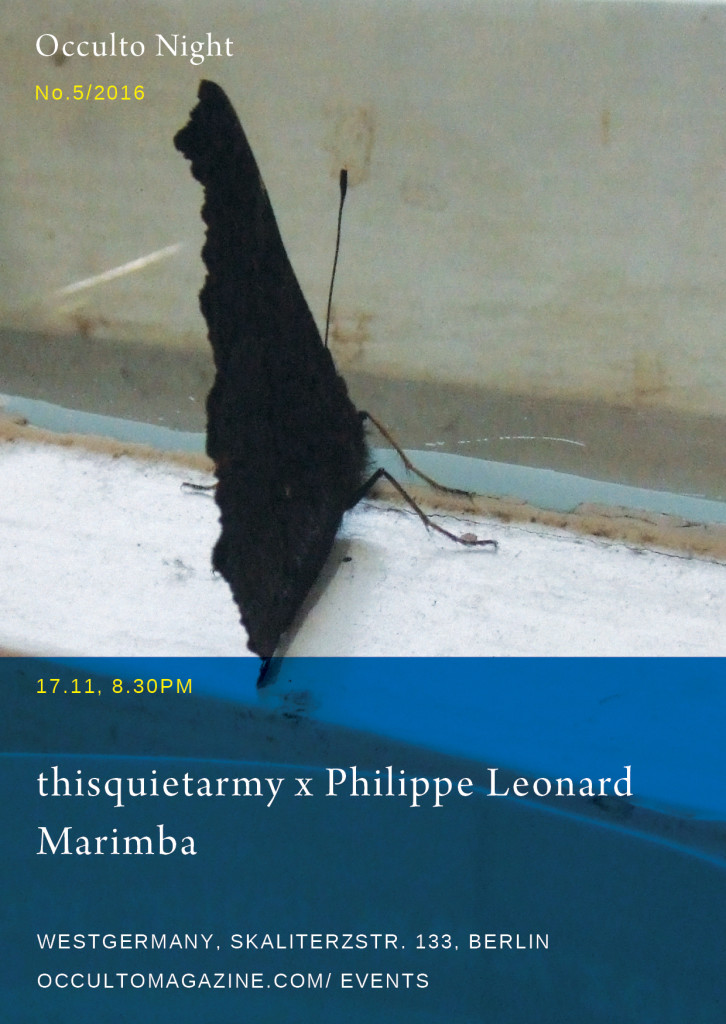 The fifth arthropod of the 2016 Occulto Night season is a beautiful Inachis Io specimen, showing its ventral black surface and introducing you to two great duo performances.
Philippe Leonard with his double 16mm live projections – you may have seen him at work already if you went to any Godspeed You! Black Emperor gig lately – and Thisquietarmy with his improvised, cross-genre ambient/noise/shoegaze/doom guitar drone set will present their new collaborative project, while Berlin based Marimba (aka Delmore FX and Paul Jones, and please check Das Andere Selbst label while you’re at it) will derange your senses with improvised and composed melodies, noises, guitar and synth sounds.

This is the last Occulto Night of 2016 – you’re warmly invited to join and celebrate with us! More to come in 2017.

THISQUIETARMY X PHILIPPE LEONARD: DRONE GUITAR RITUAL X DUAL16MM PROJECTIONS
An opportunity to see in action Philippe Leonard, influenced by the great tradition of North American experimental cinema, whose practice on film (16mm and 35mm) led him to important collaborations, including the contribution to the visuals of Godspeed You! Black Emperor, and the pioneering Thisquietarmy music project. The Canadian duo works in great synergy on the possibility of expanded cinema. An alchemy of cinema and sound, working on the matter and on devices (16mm film projectors/electricity, guitar and pedals) for a journey that explores the possibilities hidden in the image and its serial essence.

MARIMBA
Marimba is an ongoing side project by Paul Jones (Cindytalk, Mothership Convention, Stolen recordings) and Elia Buletti (Delmore fx, Das Andere Selbst). They met in Berlin on 2013 and share since then a multitude of interests and diverse influences from metaphysical bacterium to gate compression. They’re creating instinctive natural sonic forms that evolve through improvisation and derangement of all the senses.
marimba.bandcamp.com

The OCCULTO NIGHT series brings good independent music in Berlin with a focus on experimentation, cross-genre projects, rare performances and new material; it is informed by and closely connected with the vision and interdisciplinary attitude of the yearly science and arts publication Occulto.