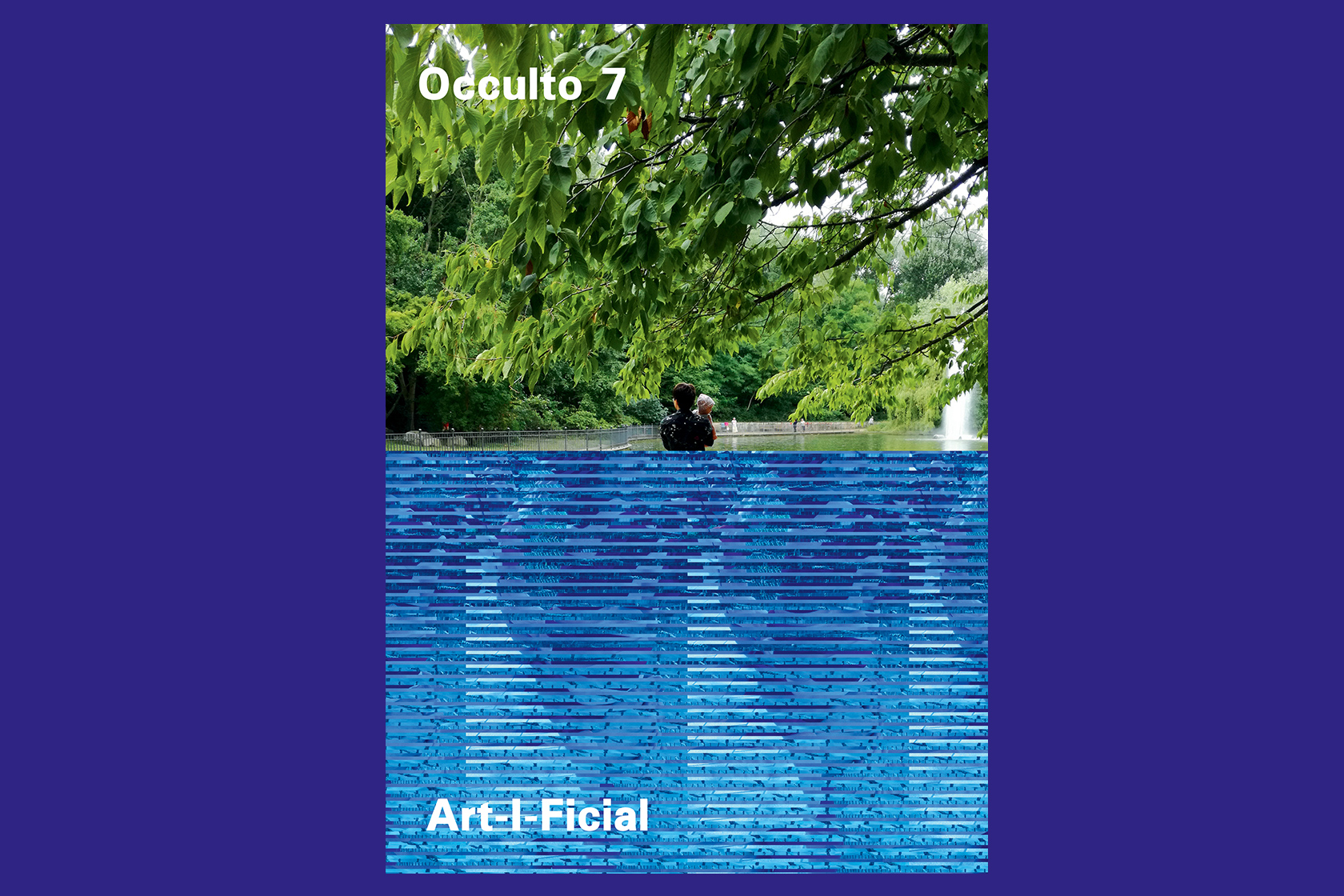 Tilted poplar trees trying to straighten up in a lab, Alan Turing’s jokes and prophecies, a 18th century machine that utters “MA-MA”, the discarding of the words “discernible”, “underwear” and “sphagnum” as waste, the portrait of a machine learning system as a botanical artist, self-delusion at the service of the secret services: Occulto 7 invites you to explore its “Art-I-Ficial” theme, while employees with binoculars protect our internet connection from fishing boat sails.

Artificial is, in one of many possible definitions, something “whose source is not biological evolution but technological manufacture.” This simple statement presents us with several questions. Even if we temporarily suspend the issue of (re)defining what technological manufacture is beyond inadequate man-made connotations, the trouble is that natural and artificial, provided they exist as discernible categories, have been mixing with each other for ages on our planet.
– Alice Cannavà, editorial text

The images presented here are photo documents of deep sea internet cable landing sites, cable coil dungeons, cable maintenance, cable layoing ships, and cables resting idly at the bottom of a living ocean. The cloud network is a farce, the invisiblity of data storage is an artificiality, and the superhuman traffic speeds we enjoy in our era of high-tech progress are being preserved, reparied, and monitored at a hidden low-tech, human scale.
– Cloud Circuit, “Static studies: Four ersatz phrases in dactylic hexameter for sea (s) and cloud (c).”

At the PIAF laboratory, I was shown how plants perceive their environment, whether climatically (temperature, light, water) or mechanically (the action of wind, touch, gravity). Plants even perceive their own form! How? How do plants manage to perceive external stimuli? How do they respond to them and modulate their development, adjusting themselves to acclimatise to external changes?
– Karine Bonneval and Eric Badel, “Vertimus – An Art and Science Project. We Turn, We Turn Around, We Transform Ourselves”, co-edited by Sina Ribak.

“As a field, artificial intelligence has always been on the border of respectability, and therefore on the border of crackpottery”, is the promising incipit of Drew McDermott’s “Artificial Intelligence Meets Natural Stupidity”, a short paper from 1976 addressed to a specialist audience.
– Alice Cannavà, “AI Tales of Interest – Episode One: Names”

Voice is rapidly becoming one of the most desirable interfaces when it comes to communicating with machines. Yet, despite being often presented as a futuristic feature, voice-user interfaces (VUIs) are not just a recent trend, but rather a consistent step forward within the history of technology, with a number of precursors.
– Jenny Fadranski, “The Many Births of the Speaking Machine – A 250 Year Long History of a Maturing Technology from Analog Automatons to Digital Voice Assistants”

At this moment text is still believed to be infinite, just as the first occupiers of North America believed that forests were infinite. After only a hundred years they observed with horror that white hemlocks were no longer to be found. Perhaps in a few decades’ time we will have to accept that poetic or literary texts, or even all texts in minority languages, will have completely disappeared, something we can hardly imagine now.
– Anaïs Berck, “About Massacring Trees and Crunching Words – Applying Word Embeddings to Annie Proulx’s Barkskins”

The around 20,000 illustrations collected from digital archives have become the working material for a particular machine learning system called GAN (Generative Adversarial Network), which, after a training phase, is able to (re)create new artificial images with morphological elements extremely similar to the ones provided as reference, and with details and features that seem to bring out a real human-made representation.
– fuse*, “Artificial Botany – Real-Time Audio Video Installation, 2020”