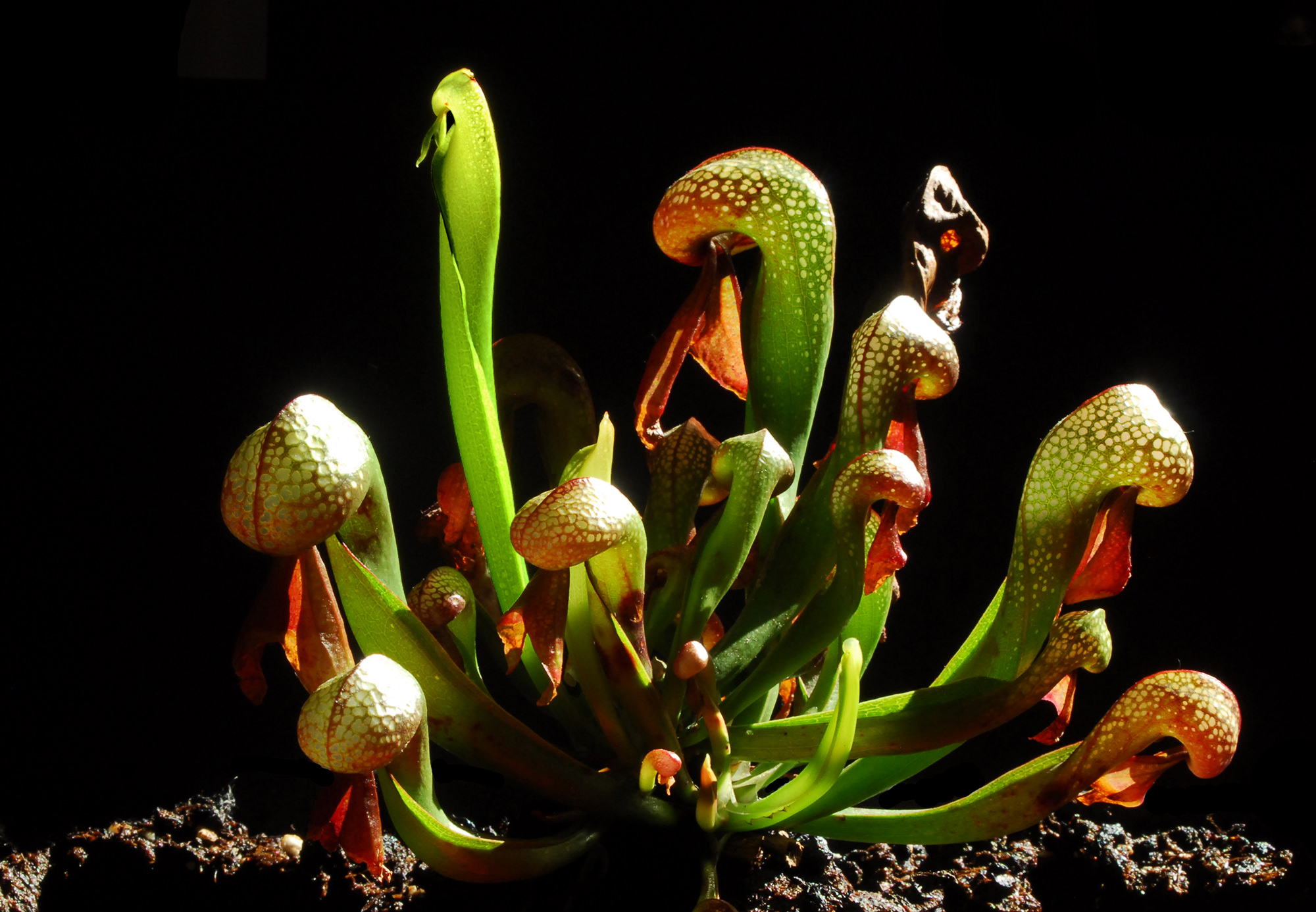 Darlingtonia californica after one year on my windowsill. Photo Giulia Liberti.

“He likes dead things”, says a housekeeper in black and white, as she slips deceased flies into the pitchers of a magnificent specimen of Darlingtonia, the Cobra Lily. She works for none else than Peter Lorre, here in the part of an insanely obsessed surgeon who, very appropriately, grows carnivorous plants – the film is Mad Love (Karl Freund, 1935). The papier–mâché animation of the pitcher’s fangs closing around the prey is both clumsy and inaccurate, as those things don’t really move – a poetic license we can perfectly excuse, for the sake of spectacle and because it represents one of the rare instances in which an identifiable, real-life carnivorous plant has filled the silver screen in close-up. A horror classic: the elegant, contorted shape of this plant condenses the morbid atmospheres of the déco set designs as a silent symbol of the omnipresent, naturally-occurring evil.

And when it comes to evil, Darlingtonia is second to none – everything about it, from the pitcher’s morphology to its commensal adaptations, contradicts the stereotype of the innocuous vegetable. As in all Sarraceniaceae, the pitcher is tubular and formed by a rolled-up leaf; trap-wise, it is similar to Sarracenia psittacina for the bulbous ‘head’, the lobster-pot effect of the inner hair, and the wicked way it exploits a flaw in the insects’ visual system: insects can’t perceive transparency, as everybody knows from the behaviour of flies against house windows. The upper part of the pitcher is punctuated with transparent portholes, confusing the victim and distracting it from the real opening, that tiny hole on the bottom that’s usually surrounded by a darker coloration and that they are most likely to overlook, to their own detriment.

The other most striking feature is the ‘fang’ (or tongue, or moustache if you want): a forked appendage hanging from the upper lip of the pitcher that can be intensely coloured. Its function is that of attracting prey through the copious secretion of nectar, while at the same time providing a convenient and attractive landing facility. The convoluted twists of the pitchers, as well as the shape of their tops and the protruding fangs have earned the plant the common name of Cobra Lily – a well grown Darlingtonia pot looks like a just uncovered nest of snakes that are about to escape all over the place. A threatening semblance, to say the least. On a closer look, we notice that the wing – that narrow flap that runs all the way along the front of the pitcher, a feature shared by the whole family – is not straight but curved, wrapped around the tube: this happens because the pitchers rotate 180 degrees during growth, acquiring a baroque feeling in the process, as if they had been modelled after Bernini’s columns in Saint Peter’s Baldachin. 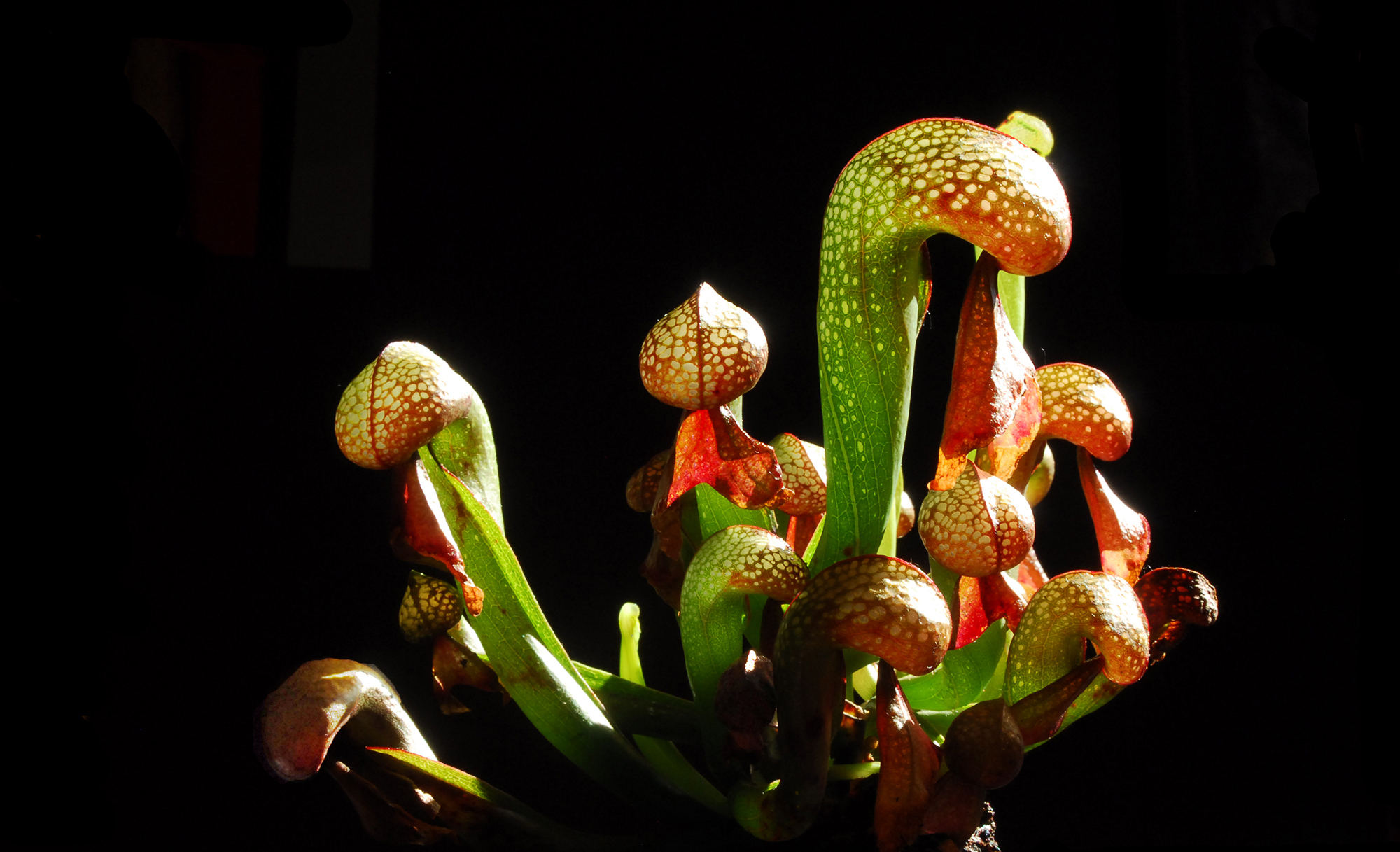 Darlingtonia californica after one year on my windowsill. Photo Giulia Liberti.

As its specific epithet may suggest, Darlingtonia californica is native to the North-Western United States, its range limited to Northern California and Oregon, from the Pacific Coast to the Sierra Nevada. Its habitat, bogs, riverbanks, and seeping slopes, often reaching high altitudes, it is adapted to the harsh conditions of a soil that is poor in nutrients and rich in serpentine – these aptly named minerals come from Serpentinite rock, a metamorphic, ultramafic rock that emerges from the Earth’s mantle at the junction between oceanic and continental plates (and in California there is, notoriously, a big one of these fault lines). Luckily, this doesn’t mean you have to order online the serpentine too: it seems they can do well without it, but it’s nice to know that besides being carnivorous, Darlingtonia is also notable as a serpentine plant – another exclusive club.

At home, you can grow it in your potting media of choice, provided it’s carnivorous-friendly (i.e. nutrient-poor) and not too compact: the roots need to be cool even as the plant sits in full sun, so you can either abound in perlite or use live sphagnum moss – the latter choice has the aesthetic advantage of surrounding your plant with a soft, bright green bed of moss (I have become a fan of live sphagnum over the past winter, and now I grow it myself in big flat trays in the living room, it grows massively with little care, and I always have it at hand). Keeping the roots cool is reputedly the biggest obstacle when growing Darlingtonia: in the wild, there’s cool spring water constantly flowing over them, thanks to the seeping slopes mentioned above. Some even suggest freezing distilled water into cubes that you put around the plant, but for now all I have done is top water them and spray them when they’re in full sun, and it seems to work.

The choice of the pot is crucial, though: a black vase is ideal, always for protection from overheating; also, it has to be wider than it is tall, as these plants expand laterally even more than vertically. They do so underground, sprouting stolons from which new roots grow: at which point, you can cut them and get a free clone. This propagation method is ideal for growers like me who don’t have the patience to pollinate their plants, collect seeds, cold-stratify them (i.e. keep them in the freezer for weeks), plant them, hope they will sprout, then wait holding your breath for those 3 to 6 years it takes to get an adult plant, that is, if they don’t die in the meantime. No, thanks.

The only reason for growing the plants through the longer process would be to appreciate live the odd-looking juvenile pitchers: their upper lip is elongated in what looks like a beak, and the opening shows from its sides like the eyes of a medieval mask. Research indicates that juvenile pitchers are not just simplified adult leaves but are actually adapted to a different set of prey – I suppose this means smaller insects. Adult plants feed on flying insects as well as ants, much like their Sarracenia cousins. The pollination of Darlingtonia has been a long-standing mystery, though it seems the job is done by a ground-burrowing bee called Andrena nigrihirta. Plants that are pollinated by bees are called ‘melittophilous’, so now you can brag about that, too. 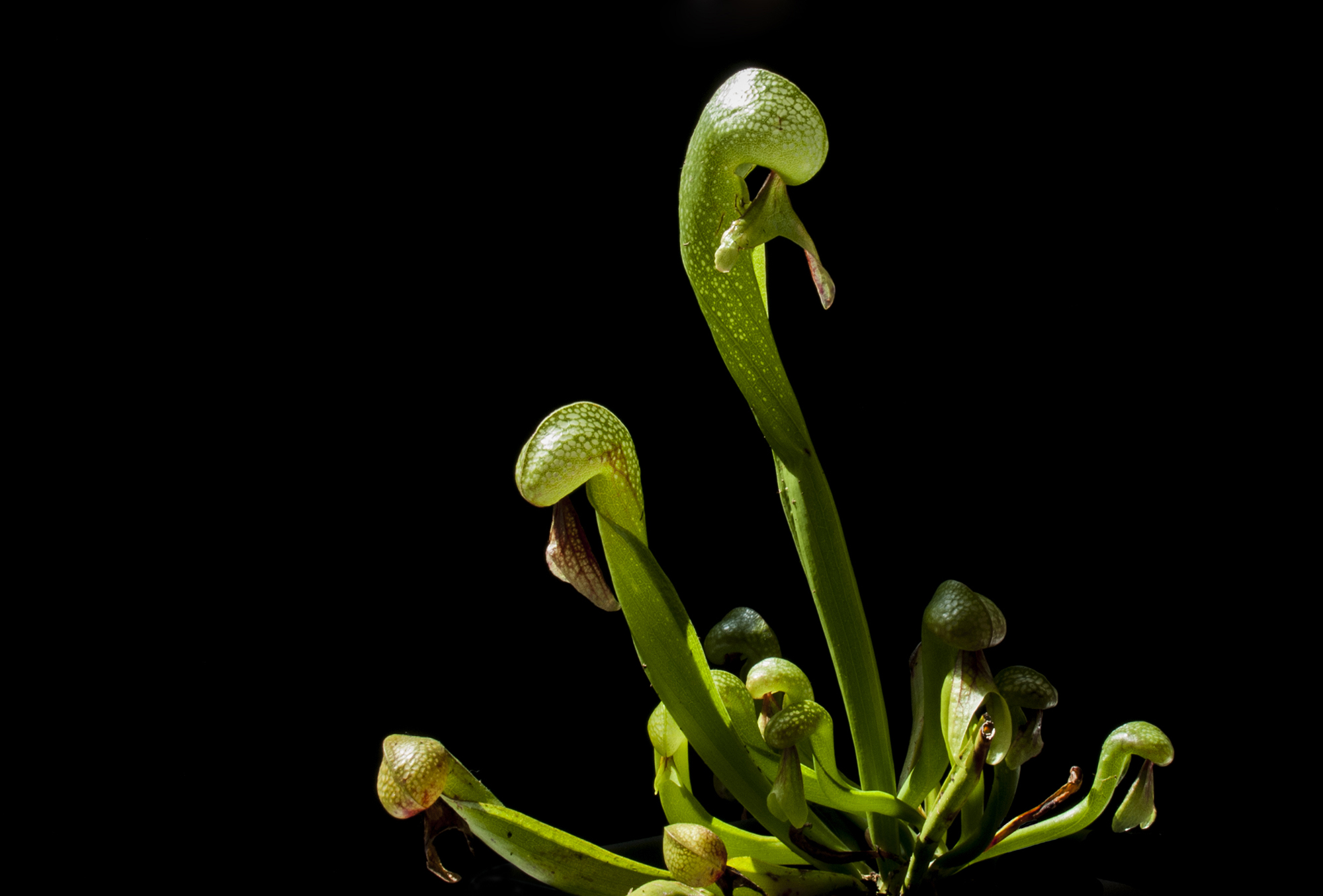 Darlingtonia is the most basal member of the Sarraceniaceae clade – contradicting the popular perception that Heliamphora must be more ‘primitive’ because they look simpler. Darlingtonia is a monotypic genus: D. californica is its only species, even though genetic variations among wild populations allow for a wide diversity in coloration patterns. An anthocyanin-free form discovered in the Sierra Nevada has been introduced to horticulture with the cultivar name ‘Othello’ – it’s all green like jealousy – and then named as intraspecific taxon as D. californica f. viridiflora. There is also an all-red variant, very good-looking, that would then become D. californica f. atropurpurea.

This brings us to the problem of genotype and phenotype, cross and delight of every horticulturist who likes his plants to express their spectacular potential to the fullest, and to display the variations that make each cultivar one of a kind. This goes for all carnivorous plants, not just Darlingtonia, though it is all the more evident with the Sarraceniaceae and Dionaea. When you get a plant of the Othello variant, you know it will always stay green, as it has no anthocyanins that could ever make it turn red. But if you get an all-red one, it will be all-red only if you grow it in full sun, as the anthocyanins need the sunlight to do the trick. Therefore, before you spend money on a fancy variant, make sure you can grow it right, or you will get a banal, uninteresting result. If you can’t keep it under direct sunlight, get an Othello and it will look like it was all planned that way.

No need to worry too much, though: my own Darlingtonia was mostly green when it arrived by mail, with just a splash of red on the fangs – the so-called ‘Blush Fangs’ color pattern. In a year, the pitchers’ heads turned dark red (‘Crimson Pitchers’), which means you can do it, even with a perpetually cloudy sky as we have here in Berlin.

I have never fed my plants, though I can see they are eating – dark spots appear against the light on the bottom parts of the pitchers. And when the old pitchers shrivel up in the spring and it’s time to cut them, you can observe swarms of tiny worms thriving on the decomposed insect matter inside them: they are the larvae of a midge, Metriocnemus edwardsi. They compete with another permanent lodger, a mite that’s so much part of the furniture in the pitchers to have deserved the name Sarraceniopus darlingtoniae: it spends its whole life cycle within the phytotelma, the ecosystem that forms inside the pitcher and that lasts as long as this lives, i.e. about a year. When the pitcher withers, the mites crawl out of it and into a new, freshly opened one – on their own accord. 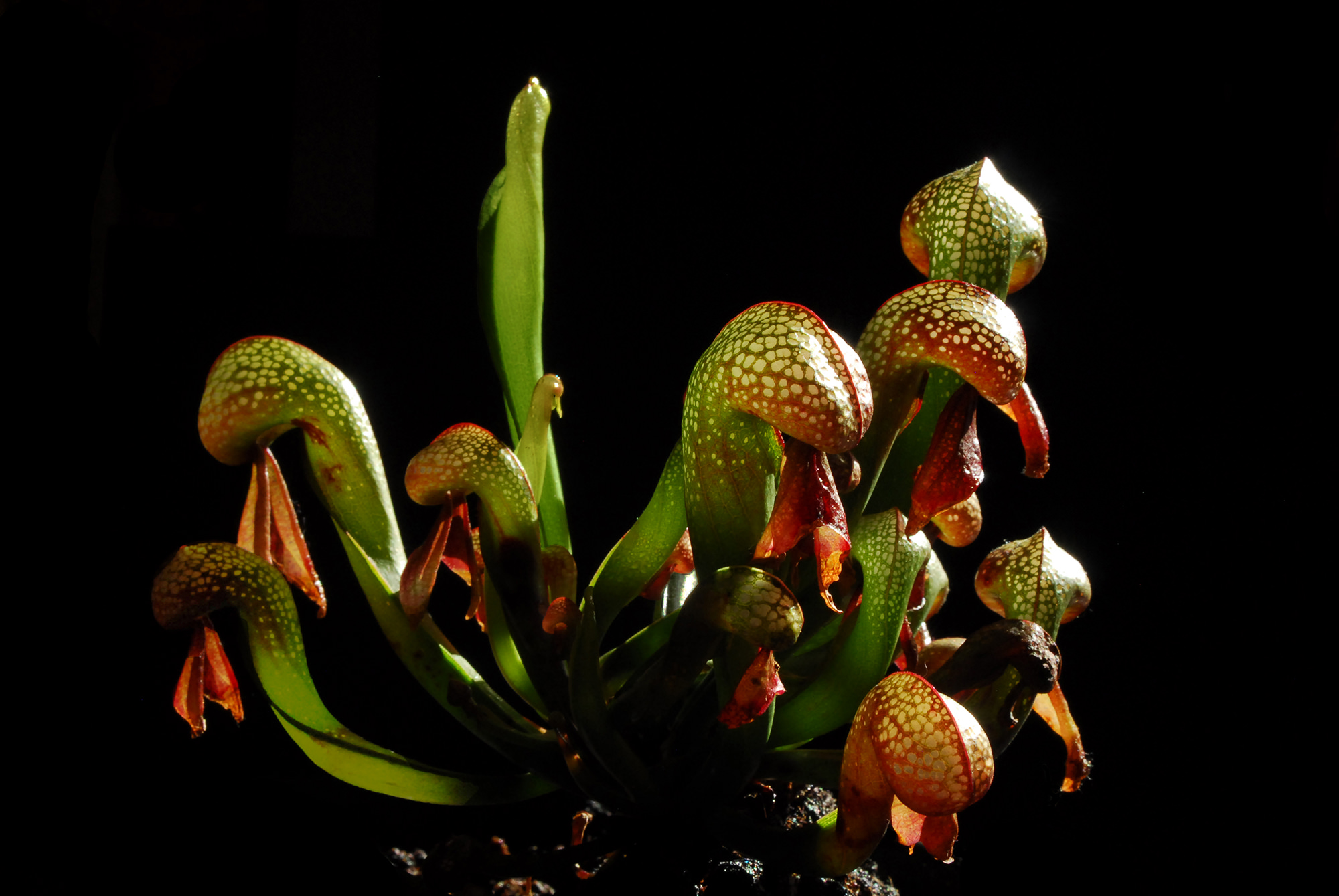 Darlingtonia californica after one year on my windowsil. Photo Giulia Liberti.

These mites and their larvae feed off the bacterial infauna of the pitcher fluid – a not-too-abundant fluid, as the covered pitcher tops prevent rainwater from getting in and the plant has to secrete its own liquid. It doesn’t secrete its own enzymes, though, and relies on the bacteria for digestion. This is common among pitcher plants – what is not common is the recent discovery that the bacteria also facilitate prey retention, as their presence considerably reduces the fluid’s surface tension: ants can easily walk on water thanks to its surface tension, but in pitcher fluid this is so low that they fall right in, and drown.

As for the flowers, I am still waiting – my plant has never given any signs of imminent blooming. Google tells me they look similar to the Sarracenia’s, hanging from their long stalks with overlapping layers of petals and sepals. Their unique feature is, of course, a creepy one: the gaps between the petals look like eyes, malevolent, ill-intentioned eyes.

With this panoply of horrific details, Darlingtonia is a must in your carnivorous garden: it is not nearly as difficult to grow as they say, and the botanical curiosities that come with it will become part of your daily life – I know very well that they are named after William Darlington, American botanist from the 19th century, but I can’t help calling them Darlings.